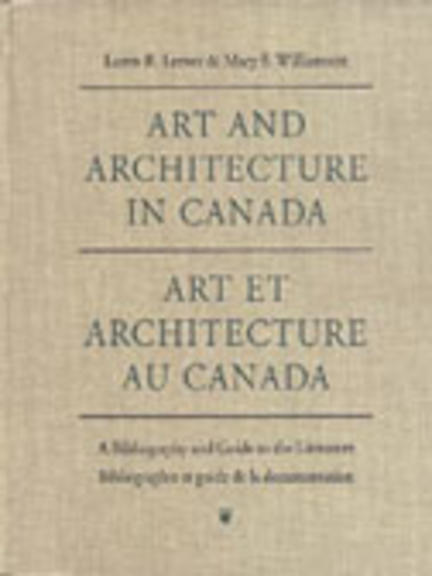 Over the years, a vast body of literature has developed devoted to Canadian art and architecture. Until now that body of work has not been readily accessible to the researcher or scholar. This bibliography and reference guide identifies and summarizes thousands of books, article, exhibition catalogues, government publications, and theses published in many countries and in several languages from the early nineteenth century to 1981. The work encompasses, from the sixteenth century onward, artists who have come to Canada as immigrants or visitors, native born Canadian artists, and Canadian artists who have lived and worked abroad.

The 9555 entries in Volume I cover painting, sculpture, graphics arts, photography, decorative arts and fine crafts, architecture, Indian and Inuit arts, and related areas such as art education, arts policy, and collecting. The entries are presented chronologically under a series of topics and geographical designations. The work is bilingual; each bibliographic citation is followed by a descriptive annotation in the language of the original publication.

Volume II presents English and French subject indexes and an author index, which provide detailed access to information on thousands of artists, collectors, art historians, curators, and art writers, and to information on art associations, museums, and artistic activity across Canada.

Loren Lerner is a professor of art history at Concordia University, Montreal. In 2005, she was the curator of Picturing Her: Images of Girlhood at the McCord Museum. Recent publications include articles in Canadian Children’s Literature, Journal of Canadian Art History, and the McCord/AMS Colloquium, Comparative and Interdisciplinary Approaches to Child Health in the 20th Century.

Mary F. Williamson has retired as a fine-arts bibliographer and adjunct faculty in graduate art history at York University. She co-authored Art and Architecture in Canada (1991), and her recent writings on nineteenth- and early-twentieth-century cookery have appeared in Covering Niagara: Studies in Local Popular Culture (WLU Press, 2010) and The Edible City (2009).

Tom Sharp is the younger of the two boys who came to live with the Williamsons in Canada. He had a civil service career in trade policy and was awarded the Commander of the British Empire (CBE) in 1987. He was an elected local councillor in Guildford, Surrey, a governor of two local schools, and a citizens? advice bureau member.

Other titles by Loren Lerner

A Bibliography and Guide to the Literature

Other titles by Mary F. Williamson

Letters of Marie Williamson from the Canadian Home Front,1940–1944