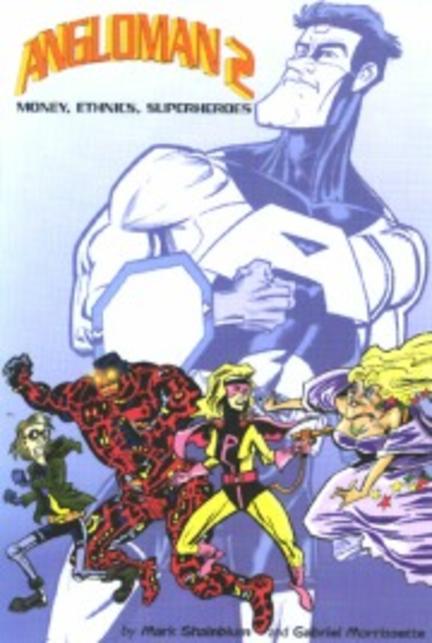 He's Québec's best-known ethnic minority superhero. He spent 22 weeks on the Montreal Gazette bestseller list and received rave reviews from everybody from La Presse to The Toronto Star to Geist. He's Angloman, and he's back for another parody-rich romp through the surrealistic politics of La Belle Province and the country as a whole!

Barrel-chested champion of bilingualism and tolerance, always well-meaning but thick as a brick, Angloman is joined by his partners in parody Poutinette and West Island Lad, and a crew of political adventurers like Power Chin, Canada! man and Le Capitaine Souche.

In Angloman 2 there's a whole new cast of post-referendum personalities, including the all-powerful, all-knowing Ethnoman, who will, of course, stop at nothing to destroy the French fact in Québec! Can Capitaine Souche stop this mad genius and his super-powerful ethnic ballot box of doom, or will he finally face the one foe he simply cannot defeat? Can Matzohgirl, teenage super-powered defender of Côte Saint Luc, escape the insatiable clutches of La régie? Even tougher, can West Island Lad get her to go out with him? What will become of Blocman now that he's no longer bloced? Will Partition Man divide Québec?

And where have all the anglos gone? Are they really leaving Québec of their own free will, or is something else afoot? Will Angloman, Poutinette and West Island Lad survive their encounter with the malevolent Torontorg, and more important will Toronto survive its encounter with them?

Gabriel Morrissette is an illustrator, animator, and comic book artist. He is a frequent contributor to chickaDEE Magazine and the co-creator of Northguard, Fleur de Lys, and Angloman with Mark Shainblum. He lives in Montreal.

“Faster than a police car speeding through a red light! More powerful than the language police! Able to leap empty downtown office buildings in a single bound! Look up in the sky! It's a best-seller! It's a sequel! It's Angloman 2!... Politicians and their handiwork are just part of the Angloman 2 canvas. Shainblum and Morrissette also set their sights on bumbling bureaucracy, phony fortune-tellers, geeky comic-book conventions and other pop-culture scenery.”

Other titles by Mark Shainblum

Alternate Histories of the Jewish People

Making the World Safe for Apostrophes

Other titles by Gabriel Morrissette

Making the World Safe for Apostrophes