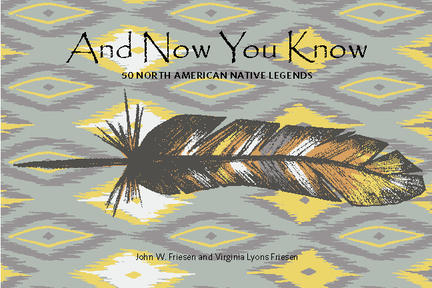 Before the printing press dominated the world of formal communications, families, communities, and cultures relied on the oral tradition to pass along revered knowledge. Valued cultural content, particularly spiritual and historical beliefs and practices, was transmitted through legends and stories shared between generations by acknowledged storytellers and Elders. This practice was very much the case with Indigenous communities throughout North America. Represented here are legends from many Native groups, including Sioux, Cree, Hopi, Haida, Iroquois, Creek, Dakota, and others.

John W. Friesen, PhD, DMin, is a professor in the Faculty of Education at the University of Calgary, where he conducts research in Aboriginal education and teacher training. An ordained clergyman with the All Native Circle Conference of the United Church of Canada, he has authored or co-authored more than 50 books.

Virginia Lyons Friesen, PhD, is a sessional instructor in the Faculty of Communication and Culture at the University of Calgary and a frequent instructor at Old Sun College in Siksika, Alberta. She has co-presented a number of papers at academic conferences and has co-authored several books.

Origin of Buffalo: A Sioux Legend

When the Great Spirit first created animals and the people of the plains, He did not create buffalo.They were created later.

At that time, the various Indian tribes who lived on the North American plains enjoyed eating nutritious roots, berries, and nuts, and also hunted small animals for food. The people lived a rich, full life, but one day the Creator came up with a new idea.

“I want to create a special animal for the people of the plains,” the Creator announced one day. “It will be a superior animal, one that can provide everything for the people: warm clothing, delicious food, useful tools, and even thick teepee coverings to keep out the cold. The people will be able to make the horns and hooves of this special animal into useful items. The animal will be called buffalo, and he will have a very large hump on his back. He will be able to run very fast but he will have poor eyesight so that hunters will be able to trap him.That way the people can use the many gifts of the buffalo to enrich their lives.”

The Creator went ahead with His plan and created the buffalo.

One day, a plains tribe, the Sioux, decided to move to a new location near a series of rolling hills. One of the hills had a cave in it, and this is where the first buffalo came to the plains. A skilled Sioux hunter out hunting, was suddenly surprised as he watched the first burly buffalo emerge from the cave, followed by another and another and another. Soon the whole valley was full of heavy buffalo and they spread to the plains in large numbers. The Sioux hunter was amazed at what he saw. When he was finally able to catch his breath he ran back to his village and shared the wonderful news. The buffalo would be a good animal to provide food and clothing and useful utensils. By now a large herd of buffalo had also reached the village area and the people wondered where this magnificent animal had come from. The hunter who had first spied them was happy to tell his story.

Quickly, a group of village hunters prepared to go on a buffalo hunt. Before long the villagers were enjoying their first taste of buffalo meat. It did not take long for the Plains Indians of North America to discover the many other uses they could make of the “supermarket of the plains”—the buffalo. Soon the Plains Indians became known as buffalo people.

And now you know how buffalo came to be.

Other titles by John W. Friesen

An Illustrated Compilation of Idealistic Experiments in North America

Complex Questions on the Cultural Maze

Even More Legends of the Elders

First Nations in the Twenty-First Century

Legends of the Elders

Still More Legends of the Elders

Other titles by Virginia Lyons Friesen

An Illustrated Compilation of Idealistic Experiments in North America

Complex Questions on the Cultural Maze

Even More Legends of the Elders

First Nations in the Twenty-First Century

Legends of the Elders

Still More Legends of the Elders

More Legends of the Elders

A Plea For Integration