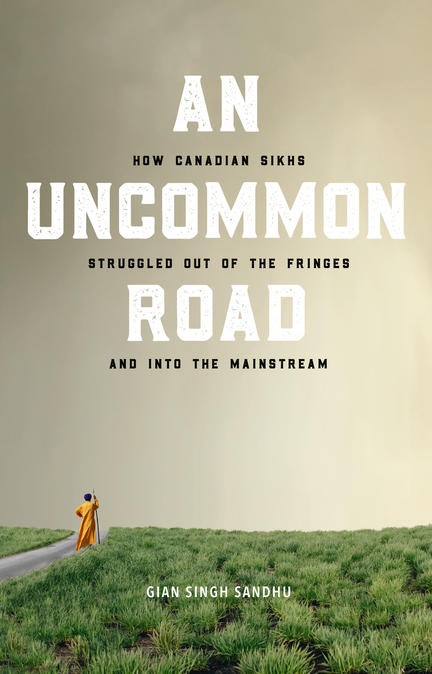 "The book is the tale of an immigrant’s arrival in a strange new world, of hostility and insult, of persistence through ups, downs and heartaches, and, finally, of security and finding a place to call home. In that sense, it is as a story as Canadian as, oh, chaat, dal and paneer.” — Toronto Star

A riveting, incisive account of some of the most complex politics in modern Canada, from the founder of the World Sikh Organization of Canada.

Widely publicized atrocities in the mid-80s came to define Canada’s Sikhs: the 1984 assault on the Golden Temple by the Indian military, the assassination of Indira Gandhi and subsequent pogroms that left over 3,000 Sikhs dead in Delhi alone, and the bombing of Air India Flight 182 one year later. In An Uncommon Road Gian Singh Sandhu traces the evolution of Sikhs’ place in Canada: from Sikhs’ dealing with the assumption of blame for the Air India bombing; to combatting incendiary false news stories; to overcoming rampant disdain by governments in India and at home. Sharing never-before-heard stories, Sandhu offers a remarkable view of some of the most complex modern politics Canadian citizens have ever faced.

But struggle can lead to liberation. Over three decades, the World Sikh Organization fought for landmark human rights legislation, from the rights of Sikhs in the RCMP to wear turbans, to campaigning on behalf of religious freedoms for others, and championing the acceptance of gay marriage.

An Uncommon Road is the celebration of an extraordinarily resilient people and a moving roadmap for how individuals, and a community, can fight for their own social justice and—in doing so—gain justice for all.

Gian Singh Sandhu became the founding president of the World Sikh Organization of Canada in 1984 and remains active in that group today. Having emigrated from India in 1970 to Williams Lake, B.C., he is also a proud Canadian and was recognized in 2002 with the Order of British Columbia. He lives in Surrey, B.C.