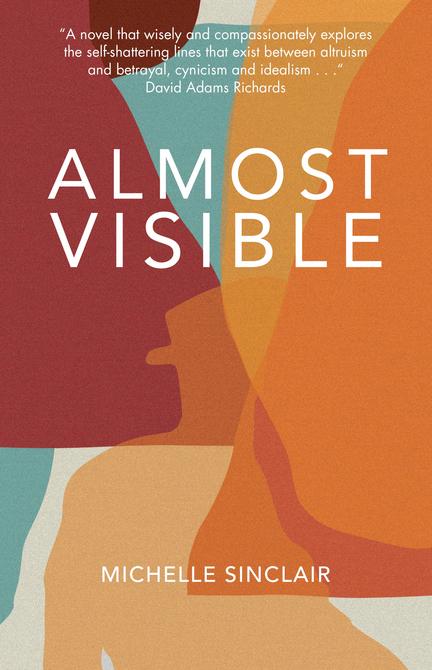 Tess has just moved to Montreal from Nova Scotia, and seeks to lose herself by involving herself in the lives of others. She befriends an older man while delivering meals to the elderly. Her interest in his past veers into obsession after furtively going through his photos and letters and “borrowing? his journal.

Though fact and fiction are blurred, they reveal a man shaken by political polarization and repression in his Latin-American homeland.

Tess learns about a young, passionate man in the 1970s forced to reconcile his love for a militant young woman and his dedication to his best friend whose family is on the other side of the political divide. As she delves deeper into Mr. the man's story, she questions her own life choices, emotions and obsessions.

Exploring cultural and personal memory, Almost Visible reflects on what can happen when a lonely person intervenes in another person's life.

Michelle Sinclair worked for two decades on policy related to human rights issues. She is fortunate to have lived, studied or worked in Australia, Bangladesh, Costa Rica, Ecuador, France, Switzerland and the United States. She lives in Ottawa with her family. Almost Visible is her first novel.

"A novel that wisely and compassionately explores the self-shattering lines that exist between altruism and betrayal, cynicism and idealism, and the harsh price paid by both sides." David Adams Richards, Giller and Governor-General award winner