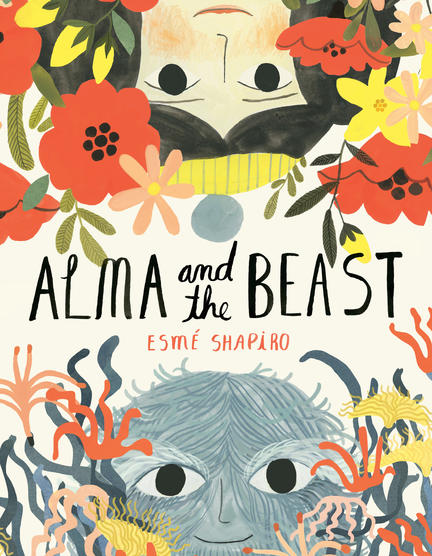 Alma's beautiful, hairy world is turned upside down by the arrival of a stranger. From the utterly original imagination of the author-illustrator of Ooko comes a story about celebrating differences and making new friends. For fans of Where the Wild Things Are and Wild.

Alma lives happily in her hairy world, where she can braid the trees, comb the grass, pet the roof and feed her plumpooshkie butterfly. Until one day . . . a hairless, button-nosed beast appears in the garden! At first Alma is scared but when she realizes the beast is lost and misses her hairless home, Alma offers to help her find her way back. As the two take a fantastical journey through the red-headed woods and the bearded mushroom glen to the beast's bald abode, they discover that they are much more alike than different.

This quirky and charming story about friendship, empathy and perspective invites readers into a surreal, fantastical world that evokes Alice in Wonderland, Where the Wild Things Are and The Lorax.

ESMÉ SHAPIRO grew up in Laurel Canyon, California and Ontario, Canada. Currently she and her dog, Chebini Brown, split their time between Brooklyn and New York's Hudson Valley. A graduate of The Rhode Island School of Design, Esmé is a past recipient of both the Nancy Lee Rhodes Roberts Scholarship and The SILA West 53 Gold Award-Phillip Hayes Scholarship. She has previously written and illustrated Ooko, which was nominated for a Governor General's Literary Award in 2016, and has illustrated Yak and Dove by Kyo Maclear and Eliza: The Story of Elizabeth Schuyler Hamilton by Margaret McNamara. She has exhibited at The Society of Illustrators, and her work has been featured in Taproot and Plansponsor magazines. Connect with her online at esmeshapiroillustration.com, on Twitter and Instagram @esmeshapiro.

“With lessons on friendship, culture, and helping others, and language and art reminiscent of Alice’s Adventures in Wonderland, this endearing picture book is richly rewarding.” --School Library Journal, starred

"It’s a sweetly psychedelic mix of Tove Jansson, Van Gogh, and what is now recognizably trademark Shapiro. . . . [her] tale is a gentle charmer, plain and simple" --Quill & Quire, starred

“[A] well-paced and neatly structured story.” --Kirkus Reviews
“What’s fresh is Shapiro’s distinctive way of making readers consider not only cultural norms, but everything the two have in common.” --Publishers Weekly
"Shapiro’s worlds, both hairy and human, are warmly imaginative, and young readers will love the idea that an entirely new realm might be accessible simply by climbing the right tree." --Booklist
"The illustrations, with their echoes of tropical fabric prints, are eye-catching, and Mala’s house in the woods, with its shingled roof and turrets, looks like it would be a fine place to live — with no adults in sight!" --CM Magazine
“Esmé Shapiro's gorgeous watercolor, gouache and pencil illustrations allow this story to soar, her boldly colorful palette and textured details bringing Alma to fantastical life. In this charming picture book. . . . Alma's day ends as it began, ‘like any other,’ but not before she hugs her new human friend, Mala, having learned that everyone — even ‘beasts’ — have names.” --Shelf Awareness
“Teachers could use this book when discussing differences between people and places and how to make new friends. The illustrations could be used to ignite the imagination for storytelling, writing, or drawing.” --Resource Links

Other titles by Esmé Shapiro

My Self, Your Self