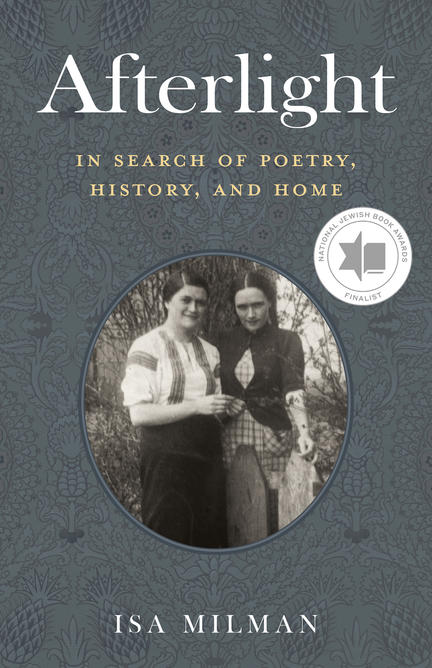 A haunting memoir of war, genocide, displacement, and a daughter’s search for the literary works of her mother’s murdered twin.

Grieving the death of her mother in 2013, author Isa Milman embarked on a heart-wrenching journey to unravel a family mystery—the whereabouts of her aunt’s long-lost poems, published in Poland in the early 1930s—which evolved into a broader investigation of her family’s life before, during, and after the Holocaust. This powerful memoir chronicles a lesser-known chapter of the Second World War through the story of two sisters: Sabina, Isa’s mother, who survived the war, and Basia, Sabina’s twin, who did not.

Exploring themes of loss and displacement, regeneration and resilience, Isa discovers how her own story is woven into the immense yet intricate tapestry of the Jewish experience. As she delves into her family’s history, accompanied by her husband, a native British Columbian, she travels to contemporary Poland, Ukraine, and Germany, and tries to reconcile her shifting appreciation of people and place, in a world where anti-Semitism and other forms of extremism are on the rise once again.

Isa Milman is a poet, visual artist and occupational therapist who has lived in Canada for the past 30 years. Her first poetry collection, Between the Doorposts, won the 2005 Poetry Prize at the Canadian Jewish Book Awards. She has also published a poetry chapbook, Seven Fat Years; her work has appeared in a number of journals and anthologies.A daughter of Holocaust survivors, Isa Milman was born in a displaced persons camp in Germany before immigrating to Boston. A graduate of Tufts University, she lived in San Francisco and Paris while pursuing improvisational dance and theatre activities. With a masters degree in rehabilitation science, she taught occupational therapy at McGill University and currently works at the Victoria Epilepsy & Parkinson’s Centre.

“Written with powerful awareness and historical heft, the memoir Afterlight follows the daughter of Holocaust survivors as she travels to unpack her lifetime of living with the aftermath of a genocide.”
—Foreword Reviews

"What a remarkable, deeply moving act of homage Isa Milman has accomplished: a long quest to rescue stories of relatives enduring war-time atrocity from oblivion; a Kaddish performed through personal on-site practice and writing. With candour, humility, and courage, she travels in space and time through this "scarred landscape," calling upon imaginative thought experiments to supplement the spare horrifying facts. Afterlight is a telling reminder that atrocity thrives in the dark and must be unearthed, whatever the anguish, in order to be overcome."
—Don McKay, Governor General's Award-winning poet

“Isa Milman’s Afterlight is as close to a living history as one can come. There is a quality of lucid dreaming in this memoir. Told with a poet’s exquisite attention to detail, it is a work of exhumation—a bringing to light that which has always been with us.”
—Eve Joseph, author of In the Slender Margin

"Afterlight is a powerful journey. By going to Poland, where her Jewish family was torn apart by war, Isa Milman invests her story with potent force. We are taken into the frozen Siberian gulag; we escape Stalingrad just before the Germans arrive. Compelling and poignant, Afterlight is a truly luminous book."
—Anne Simpson, author of Speechless, winner of the Thomas Raddall Atlantic Fiction Award

"In this beautifully written and evocative memoir, Isa Milman takes us with her on a trip back to her ancestral home in what is today Ukraine but was once Poland, as she searches for the writings of her aunt, her mother’s twin sister, who was one of the several million victims of the Holocaust. In chapters that alternate between past and present, Milman suggests how the afterlight of historical tragedies can both illuminate and complicate the present."
—Goldie Morgentaler, Professor of English at the University of Lethbridge and award-winning translator from Yiddish to English of the work of Chava Rosenfarb

"Marrying dogged research with sharp emotional insight, and storytelling both intimate and poetic, Isa Milman reassembles her brutalized family tree. With palpable love, unflinching horror, and unexpected joy, she reclaims and reimagines the almost unutterable memories that her mother held in silence until just before her death. Meanwhile, Milman gives voice to so many children of the European Jewish diaspora, as she moves toward her own peace with the land that bore and then cast out and swallowed her ancestors."
—Naomi K. Lewis, award-winning author of Tiny Lights for Travellers

“In search of a family narrative shattered by war, displacement, and genocide, Isa Milman traverses the past and present in Poland and Ukraine, Israel, and Canada to weave a memoir of profound loss and great love. Time and again, Afterlight pierces through darkness and leads, at last, to acceptance, recovery, and hope.”
—Ruth Panofsky, poet and author of Radiant Shards: Hoda’s North End Poems

"Isa Milman’s Afterlight is an absolutely riveting memoir. From her parents’ survival in a Siberian gulag to her own investigation of the scarred landscape of eastern Europe, the author portrays a deeply moving journey across time and space as she searches for traces of history, including her aunt’s lost poetry, and explores the meaning of home in the aftermath of the Shoah."
—Helga Thorson, associate professor, University of Victoria, Germanic and Slavic studies

“Isa Milman brings an artist’s eye, a love of the music of language, and a ferocious tenacity to her quest for her family’s lost ones, for the survivors, for herself. As the still unfathomable atrocities of the Holocaust retreat from living memory, her story glows in the afterlight of history and memory, deeply personal and ultimately profound.”
—Diana Wichtel, award-winning author of Driving to Treblinka: A Long Search for a Lost Father

"In Afterlight, Isa Milman tells a timely personal narrative of travel and discovery, which is entangled in the twentieth-century calamity of the destruction of Jewish life in eastern Europe.  Milman provides a fresh and thoughtful reconsideration of postwar Polish Jewish identity. 'Was I not free,' she wonders, as she seeks out her ancestral story, 'to adjust my own opinions without breaking the codes I’d been brought up with?'"
—Norman Ravvin, author of The Girl Who Stole Everything and A House of Words: Jewish Writing, Identity, and Memory

“Isa Milman’s powerful book takes her readers on a voyage of self-discovery through the landscapes of Eastern Europe—and Jewish memory. A story of real people and events, Afterlight reads like a mystery novel that you cannot put down until the very last page. It will have a major impact.”
—Serhy Yekelchyk, professor of Slavic Studies and History at the University of Victoria and the author of Ukraine: What Everyone Needs to Know

"Combining the threads of memory, history and imagination with a strong fabric of family stories and research embroidered with recovered maps and artifacts, Isa Milman recreates her Jewish family’s tragic fate during the horrific events of wartime Poland.  Afterlight is a beautiful, haunting memoir that speaks of both devastating pain and abiding love."
—Lynne Van Luven, professor emerita,  Department of Writing, University of Victoria

Other titles by Isa Milman

Something Small to Carry Home

All About Ukraine (with SUPPORT FOR IT RIGHT NOW)