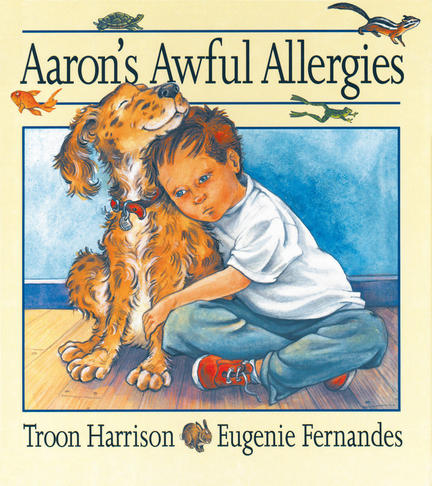 Aaron loves animals more than anything else in the world. But when he is diagnosed with allergies, the doctor tells him that his pets --- a dog, a cat, six kittens and six guinea pigs --- have got to go. After Aaron reluctantly finds each pet a new home, he discovers other ways to make animals a part of his life.

The Asthma and Allergy Foundation of America reports that an estimated one in every five adults and children suffers from allergies. Aaron's Awful Allergies will have special appeal for those millions of children living with allergies.

Troon Harrison's many picture books, stories for juniors, and teen/YA novels, are published in seven languages and in Braille, and appear in animated TV shows. She teaches creative writing, and edits for writers full-time from her office with a view of river and hills while her dog snores! When not writing, she loves to learn about local history, and to visit her horse. Among her many books, Courage to Fly was published by Red Deer Press in 2002.

EUGENIE FERNANDES loved exploring the outdoors and making her own little books when she was young. As an adult she has combined these interests by creating books such as Ribbon Rescue, The Tree that Grew to the Moon, Waves in the Bathtub, One More Pet, and Grandpa Dan's Toboggan Ride.

Eugenie is part of a very artistic family. Her father was a comic book illustrator, her husband, Henry Fernandes, is a picture book illustrator who collaborated with her on the book Ordinary Amos and the Amazing Fish, and her two children are also artists. Eugenie lives near Peterborough, Ontario, where she works in a studio that is surrounded by water and woods.

It's a cruel trick of nature: those who dearly love animals are often apt to be the most allergic to their pets. [Aaron's Awful Allergies] was labeled “Outstanding” according to Parent Council. It's an important source of help for parents who are told the awful words, “Get rid of your pets.” Aaron is miserable, inconsolable. But the solution, a fish, is a happy one, one that might, eventually appeal to some children. It worked for Aaron.

The beauty of Troon Harrison's story is in its emotional impact on the reader, the support and understanding Aaron receives from he family, and the simple but fulfilling way he comes to terms with his loss.Aaron's Awful Allergies could be an excellent source of hope and inspiration for families having to cope with the changes allergies can impose on your children's lifestyle.

Other titles by Troon Harrison

A Journey with the Underground Railroad's Most Daring Abolitionist

Eye of the Wolf

Other titles by Eugenie Fernandes

Notes from a Children's Librarian: Books on Health and Safety

Our Children's Librarian columnist, Julie Booker, brings us a new view from the stacks every month.