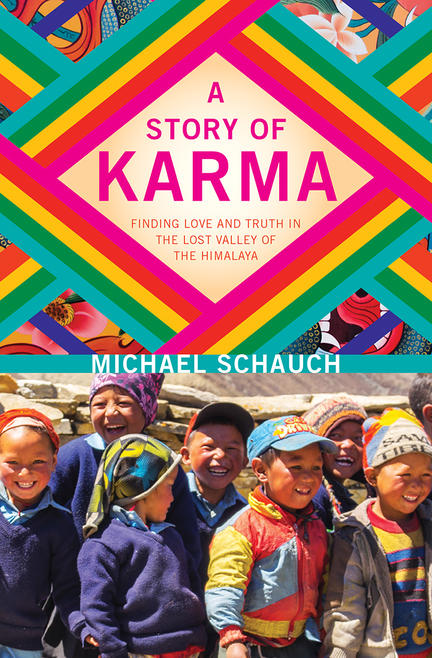 In 2012, Michael Schauch and his wife, Chantal, undertook an expedition deep in the Himalaya of northern Nepal, into a remote valley that had been closed off to outsiders for decades. They led a team of artists (a photographer, a musician, and a painter), with the objective of capturing a moment in time through their unique lenses. As a mountaineering fanatic, Michael had a second (and less conspicuous) goal to climb an unknown mountain he had only identified through a photograph. What unfolded in the mountains forced him to question his values and his own identity, and eventually resulted in meeting a little girl, which was the most profound encounter of his life. Little did either know that from that moment they would completely change the trajectory of each other’s life.

A Story of Karma recounts this journey, and the years that follow as Karma (the little girl), and Michael and Chantal grow their lives together amidst the confusing dichotomies and backdrop of Karma’s 17th-century Himalayan village; the impoverished and polluted Kathmandu; and the modern world of Vancouver, Canada.

Michael Schauch is a mountaineer, entrepreneur, and storyteller who lives to explore remote places around the world and to share the depth and beauty of human connection he discovers along the way. With early success as an entrepreneur at age 15, and over 20 years of global financial investment experience, Schauch brings his business acumen and altruistic heart to help lead and support local and international mentorship, fundraising, and educational initiatives. These include the education of girls and student mentorship in Nepal, outdoor youth leadership for those facing barriers to access nature, and holistic Indigenous leadership development in BC. Schauch holds an MBA from Queen’s University and is a member of The Explorers Club. He and Chantal make their basecamp in Squamish, British Columbia.

"Each word ushers you deeper into an external journey to the Himalayas and an internal journey to the heart. Schauch's masterful storytelling transports you to a healing realm where external and internal distinctions dissolve in the beauty of embodied love. Not only is this a tale of transformation for Schauch, the reader too is transformed." —Paula Arai, Ph.D., author of Painting Enlightenment, Bringing Zen Home, and Women Living Zen

"A man's mission to climb a mountain in the Himalayas turns into providing education for children in the most remote region of Nepal. A Story of Karma is a heartfelt and inspiring story about nature and human connection, and the amazing things that happen when you open your heart and mind to the unknown world." —Dorje Dolma, author of Yak Girl: Growing Up in the Remote Dolpo Region of Nepal

"Schauch writes a moving story of personal growth and transformation in his encounter with the indigenous peoples of the remote highlands of Upper Manang, Nepal. The desire to climb a peak drew him there, but what changed him forever was the unexpected and extraordinary creation of family ties in Nar-Phu and the role that Tibetan Buddhism played in helping him transcend differences of culture to nurture that family. Read his story with an open heart and mind – it will touch you deeply." —Mark Aldenderfer, distinguished professor of anthropology at University of California Merced, and National Geographic Explorer

"Michael Schauch's vividly descriptive writing will transport you to a remote Himalayan village and leave you with the taste of yak butter tea on your tongue and the odour of dung-fuelled fires in your clothing. A Story of Karma is a thoughtful and passionate meditation on privilege and poverty, consumerism and spirituality, fate and chance, individualism and community. Above all else, this story is a testament to the power each and every one of us has to generate meaningful and lasting change in our beleaguered world." —Jan Redford, author of End of the Rope: Mountains, Marriage, and Motherhood

"In this book, Michael Schauch shares the words of the Dalai Lama when describing the Beyul – the sacred, hidden valleys of the Himalaya – as places of multiple dimensions where the physical and spiritual worlds coalesce. 'From a Buddhist perspective [these] sacred environments… are not places to escape the world, but to enter it more deeply… Such places often have a power that we cannot easily describe or explain.…' Schauch's story introduces us to many hidden places and the people who inhabit them. It is a fine example of how the human spirit can face even the toughest challenges, and by overcoming them, change the lives of ourselves and others in a profound way." —Martin Parnell, author of Marathon Quest, Running to the Edge, and The Secret Marathon: Empowering Women and Girls in Afghanistan through Sport

"A Story of Karma" speaks to an inward journey of purpose, a quest for meaning and connection – something to which we may all aspire. What began as a test of strength, determination and grit, a monumental goal by any measure, became an invitation to an awakening of the heart, a softening of the human spirit. There is that rare combination of lyricism and raw honesty throughout. This book is a must read!" —Peter McCoppin, international orchestral conductor and national host/broadcaster

“Martin Buber, the Israeli philosopher and mystic, has said that “All journeys have destinations of which the traveller is unaware.” This is nowhere more true than in the riveting new book by Michael Schauch entitled A Story of Karma. Schauch takes us deep into the natural, cultural, and spiritual mysteries of the Himalayas of Northern Nepal, where we are dazzled by his storytelling, his fearlessness, and his wide-open heart. The tale will have you on the edge of your seat with awe. I’ve already been compelled to read it twice!” —Stephen Cope, bestselling author of many books, including The Great Work of Your Life and Soul Friends