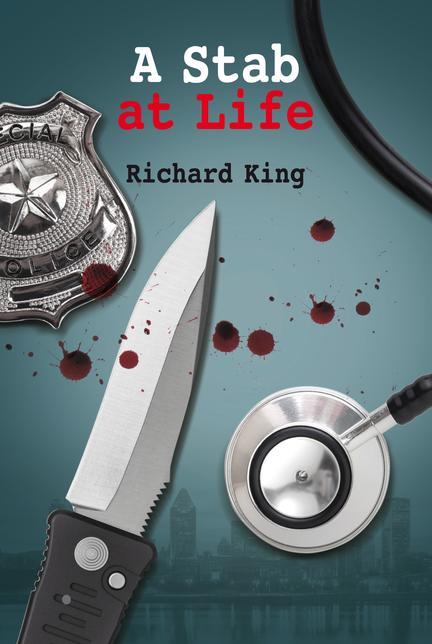 Former bookseller Richard King has created two memorable characters in his mystery novel, A Stab at Life.. Annie Linton, RN, is a nurse in the Emergency Department of the Gursky Memorial Hospital in Montreal and Gilles Bellechasse, a detective in the Major Crimes Division of the Montreal Police Force. Gilles is in charge of investigating a series of murders that have occurred in a park and the area surrounding the Gursky Memorial located in the Cote-des-Neiges area of the city. Suspects include members of a vigilante group devoted to getting drug dealers out of the park, a jealous husband, a mysterious woman of whom nude drawings turn up in one of the murder victim's bedroom, and competing drug dealers. Annie's excellent diagnostic skill play a critical role in solving the crime.

King's mysteries are reminiscent of the originators of the mystery genre, writers such as Agatha Christie and Rex Stout and modern writers such as Robert Goldsborough and Louise Penny. Margaret Cannon said of King in the Globe & Mail: “?he has talent, wit and Montreal.” A Stab at Life. will delight fans of murder mysteries and have them waiting impatiently for the next novel in the series.

Richard King owned Paragraph Bookstore in Montreal and is a former President of the Canadian Booksellers Association. His first novel, That Sleep of Death, was on the Gazette bestseller list for nine weeks. In his spare time, King does Bikram Yoga, runs with a group from the Westmount Running Room and volunteers in the Emergency Department at the Jewish General Hospital. He insists most of the characters in Accounting for Crime are fictitious.

"King, a lively writer with fine storytelling skills... Readers who know Montreal will recognize neighbourhoods, streets and landmarks in A Stab at Life. Indeed, the city is as much a character as the nurse and the detective." Susan Schwartz, The Montreal Gazette

"King, who has been a volunteer at Montreal's Jewish General Hospital for many years, makes good use of his knowledge of hospital procedures to develop the plot and character of ER nurse, Annie Linton. He also excels in weaving in working-class immigrant life in Côtes-des-Neiges into his intricate plot of crime and passion." Ian Thomas Shaw, The Ottawa Review of Books

Other titles by Richard King

From Hungary to Auschwitz to Montreal

Milestones on a Golden Road