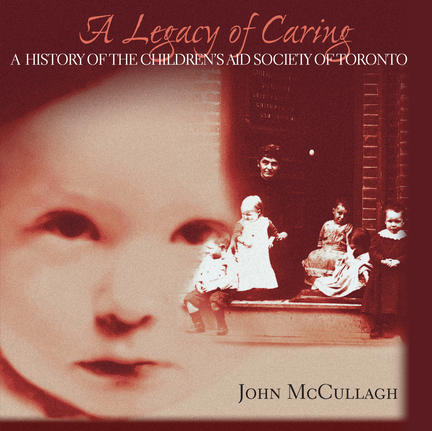 Begun in 1891, the Children's Aid Society of Toronto is the largest child welfare agency in North America. It has played a leading roll as an advocate of children's welfare; it has been instrumental in influencing child welfare practice not only in Ontario but all of Canada and elsewhere. With an emphasis on the post-World War II period, A Legacy of Caring examines the political, social, and economic factors that led to changes within the society itself as well as developments in legislation and social policy. The society has been a training ground for many highly committed professionals who have gone on to be leaders in other governmental and nongovernmental agencies in Canada and abroad.

For 33 years until his retirement in 2001, John McCullagh was a child welfare worker in Canada, the United States, and the United Kingdom. During most of that time, he was employed by the Children's Aid Society of Toronto, where he held a number of front line and management positions.

Dr. Gail Aitken is an alumnus of the Hospital for Sick Children and University of Toronto schools of nursing. She received her MA in Social Welfare Policy from McMaster University, and her Ph.D. in Social Work from the University of Toronto. She has been a nursing instructor and supervisor, a community activist developing children's services, and a social policy analyst, and has taught social policy, administration, and community practice at Ryerson Polytechnic University. She and her husband, Dr. Don Bellamy, live in Meaford, Ontario.

Donald Bellamy holds an MSW from the University of Toronto and a Doctor of Social Welfare from Columbia in New York City. After experience in rehabilitation and community work, he was a faculty member in social work at the University of Toronto for thirty years teaching social policy, planning, and research. He served on the Ontario Children's Services Review Board during the 1970s and 1980s. He co-authored Neighbours, a history of three social settlements in Toronto, with Harriet Parsons and Allan Irving. He and his wife Gail have four children and six grandchildren between them.

"Illustrates both the searing tragedy and the rewarding success stories which workers have dealt with over the years."