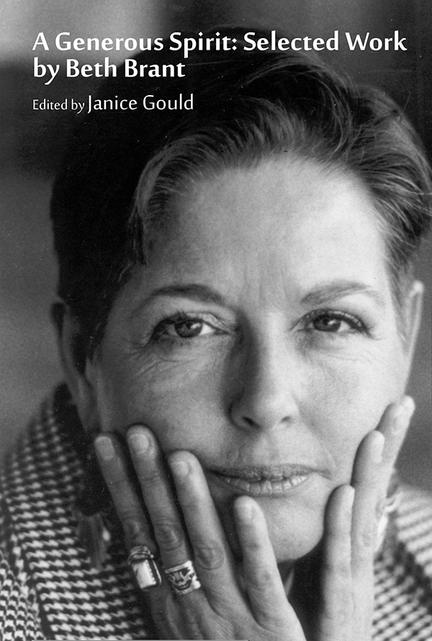 Finalist for the 2020 Lambda Literary Award for Lesbian Fiction

A Generous Spirit: Selected Work by Beth Brant collects the writing of Beth Brant, Mohawk lesbian poet, essayist, and activist. During her life, Brant's work gave voice to an often unacknowledged Two-Spirit identity, and today, her words represent continued strength, growth, and connection in the face of deep suffering. A Generous Spirit is Brant's portrait of survival and empathy at the intersection of Native American and lesbian experience. Edited by noted Native poet and scholar Janice Gould, A Generous Spirit recounts and enacts the continuance of her people and her sisters with distinct, organic voices and Brant's characteristic warmth. Her work is a simultaneous cry of grief and celebration of human compassion and connection in its shared experience. Through storytelling, her characters wrest their own voices from years of silence and find communion with other souls.

Janice Gould is of mixed European and Concow (koyangk'auwi) descent and grew up in Berkeley, California. She is a graduate of U.C. Berkeley, where she received degrees in Linguistics and English, and of the University of New Mexico, where she earned her Ph.D. in English. She recently earned a Master's degree in Library Science from the University of Arizona. Janice's books of poetry include Beneath My Heart (1990), Earthquake Weather (1996), Alphabet (an art book/chapbook, 1990), Doubters and Dreamers (2011), The Force of Gratitude (2017), and Seed (2019). She is the co-editor of Speak to Me Words: Essays on American Indian Poetry (2003), published by the University of Arizona. Janice is an associate professor in Women's and Ethnic Studies at the University of Colorado, Colorado Springs, where she developed and directs the concentration in Native American Studies.

There is a small body of water in Canada called the Bay of Quinte. Look for three pine trees gnarled and entwined together. Woodland Indians, they call the people who live here. This is a reserve of Mohawks, the People of the Flint. On this reserve lived a woman of the Turtle Clan. Her name was Eliza, and she had many children. Her daughters bore flower names--Pansy, Daisy, Ivy, and Margaret Rose.

Margaret grew up, married Joseph of the Wolf Clan. They had a son. He was Joseph, too. Eight children later, they moved to Detroit, America. More opportunities for Margaret's children. Grandpa Joseph took a mail-order course in drafting. He thought Detroit would educate his Turtle children. It did.

Joseph, the son, met a white woman. Her name is Hazel. Together, they made me. All of Margaret's children married white. So, the children of Margaret's children are different. Half-blood. "Half-breed," Uncle Doug used to tease. But he smiled as he said it. Uncle was a musician and played jazz. They called him Red. Every Christmas Eve, Uncle phoned us kids and pretended he was Santa. He asked, "Were you good little Indians or bad little Indians?" We, of course, would tell tales of our goodness to our mothers and grandmother. Uncle signed off with a "ho ho ho" and a shake of his turtle rattle. Uncle died from alcohol. He was buried in a shiny black suit, his rattle in his hands, and a beaded turtle around his neck.

Some of my aunts went to college. Grandma baked pies and bread for Grandpa to sell in the neighborhood. It helped to pay for precious education. All of my aunts had skills, had jobs. Shirley became a dietician and cooked meals for kids in school. She was the first Indian in the state of Michigan to get that degree. She was very proud of what she had done for The People. Laura was a secretary. She received a plaque one year from her boss, proclaiming her speed at typing. Someone had painted a picture of an Indian in headdress typing furiously. Laura was supposed to laugh but she didn't. She quit instead. Hazel could do anything. She worked as a cook, as a clerk in a five and ten-cent store. She made jewelry out of shells and stones and sold them door to door. Hazel was the first divorcee in our family. It was thrilling to be the niece of a woman so bold. Elsie was a sickly girl. She didn't go to school and worked in a grocery store, minded women's children for extra money. She caught the streetcar in winter, bundled in Grandma's coat and wearing bits of warmth from her sisters' wardrobes. When she died, it wasn't from consumption or influenza. She died from eight children and cancer of the womb and breast. Colleen became a civil servant, serving the public, selling stamps over the counter.

After marrying white men, my aunts retired their jobs. They became secret artists, putting up huge amounts of quilts, needle work, and beadwork in the fruit cellars. Sometimes, when husbands and children slept, the aunts slipped into the cellars and gazed at their work. Smoothing an imaginary wrinkle from a quilt, running the embroidery silks through their roughened fingers, threading the beads on a small loom, working the red, blue, and yellow stones. By day, the dutiful wife. By night, sewing and beading their souls into beauty that will be left behind after death, telling the stories of who these women were.

My dad worked in a factory, making cars he never drove. Mama encouraged dad to go to school. Grandma prayed he would go to school. Between the two forces, Daddy decided to make cars in the morning and go to college at night. Mama took care of children for money. Daddy went to school for years. He eventually became a quiet teacher. He loved his work. His ambition, his dream, was to teach on a reservation. There were so many debts from school. We wore hand-me-downs most of our young lives. Daddy had one suit to teach in. When he wore his beaded necklace, some of the students laughed. His retirement came earlier than expected. The white boys in his Indian History class beat him up as they chanted, "Injun Joe, Injun Joe." My mama stopped taking care of children. Now she takes care of Daddy and passes on the family lore to me.

When I was a little girl, Grandpa taught me Mohawk. He thought I was smart. I thought he was magic. He had a special room that was filled with blueprints. When and if he had a job, he'd get out the exotic paper, and I sat very still, watching him work. As he worked, he told me stories. His room smelled of ink, tobacco, and sometimes, forbidden whiskey. Those times were good when I was a little girl. When Grandpa died, I forgot the language. But in my dreams I remember--raksotha raoka: ra'.

Margaret had braids that wrapped around her head. It was my delight to unbraid them every night. I would move the brush from the top of her head down through the abundance of silver that was her hair. Once, I brought her hair up to my face. She smelled like smoke and woods. Her eyes were smoke also. Secret fires, banked down. I asked her to tell me about the reserve, She told me her baby had died there, my father's twin. She told me about Eliza. Eliza had dreams of her family flying in the air, becoming seeds that sprouted on new ground. The earth is a turtle where new roots bear new fruit. "Eliza gave me life," Grandma said. Grandmother, you have given me my life.

Late at night, pulling the quilt up to cover me, she whispered, "Don't forget who you are. Don't ever leave your family. They are what matters."

For All My Grandmothers

A hairnet covered her head
a net
encasing the silver
a cage
confining the wildness.
No thread escaped.

Once, hair spilling,
you ran through the woods
hair catching on branches
filaments gathered leavesburrs attached to you.
You sang.
Your bare feet skimmed the earth.

Prematurely taken from the land
giving birth to children
who grew in a world that is white.
Prematurely
you put your hair up
covered it with a net.

Prematurely grey
they called it.

With no words, quietly
the hair fell out
formed webs on the dresser
on the pillow
in your brush.
These tangled strands pushed to the back of a drawer
wait for me to untangle
to comb through
to weave the split fibers
and make a material
strong enough
to encompass our lives.

"In A Generous Spirit: Selected Work by Beth Brant, we have one marvelous native lesbian poet introducing another. Janice Gould thoughtfully presents the work of Beth Brant, a Mohawk writer who never received the acclimation she deserved while she lived. Here her poems and, especially, her robust and gritty prose pieces reveal worlds of living richly put to paper; including a marvelous story of a cross-dressing female coyote attempting to play a trick on a fox. Beth Brant is a writer of great depth and brilliant talent."
--Margaret Randall, writer, oral historian, and revolutionary, author most recently of Exporting Revolution and Che on My Mind

"For the native, queer, feminist, literary world: Beth is a home, reminding us that we are not alone in our movements towards liberation."
--Christopher Soto, poet and editor of Nepantla: An Anthology for Queer Poets of Color

"Wow! I discovered new material and remembered some of my favourite Brant gems with this collection. Reading it now, I realize that Beth Brant gave us Indigenous feminism and Indigenous queer theory even before we had a name for these practices, all wrapped up in the most beautiful storywork. Highly valuable for its literary as well as its theoretical contribution, A Generous Spirit will find a cherished spot on many, many bookshelves, now and into the future."
--Kim Anderson, author of A Recognition of Being: Reconstructing Native Womanhood

Other titles by Janice Gould