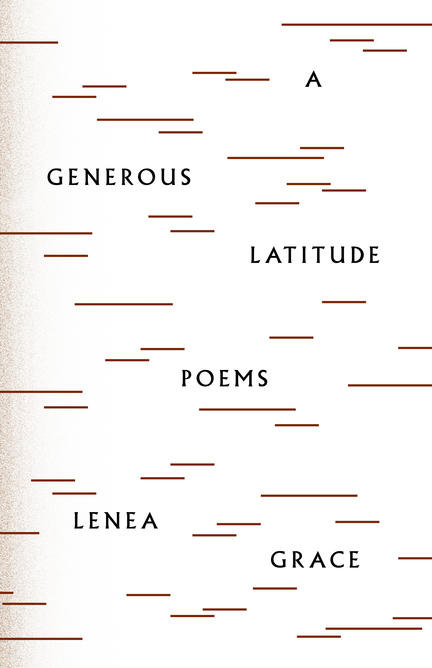 Lenea Grace’s debut collection maps a series of relationships within a greater exploration of Canadiana, barreling through shield and crag, river and slag. A Generous Latitude is not afraid of beer, bears, internal rhyme, David Hasselhoff, sediment, or sentiment. It does, however, eschew sliding down lampposts, CBC sitcoms, McGarrigles, and the sentimental. Taking humor in the human condition, A Generous Latitude toys with juxtapositions of the serious with the silly, the irreverent with more somber realities. Music both teases and generates the poems within the collection. Here, Guy Lafleur’s hockey-disco hybrid album is on par with the Righteous Brothers and Fleetwood Mac. Here, “I’m not smoking and it’s not analog, / but at 2 a.m., it is always 1979.” A Generous Latitude takes a wild, peculiar joy in supplanting the expected with rich imagery that lights the mundane and “strips the Atlantic bare.”

Lenea Grace’s work has appeared in Best New Poets, The Fiddlehead, Washington Square Review, CV2, Riddle Fence, Grain, and elsewhere. She is a graduate of McGill University, University of Maine at Presque Isle, and The New School. Lenea is a founding editor of The Mackinac poetry magazine. She grew up in Texas and Oklahoma, spending her summers at Long Lake and John Island in northern Ontario. She lives in Gibsons, British Columbia.

“Grace reads like an experienced pro in the debut collection, her grit shines and she has some panache . . . A Generous Latitude burns like the best.” — Today’s Book of Poetry