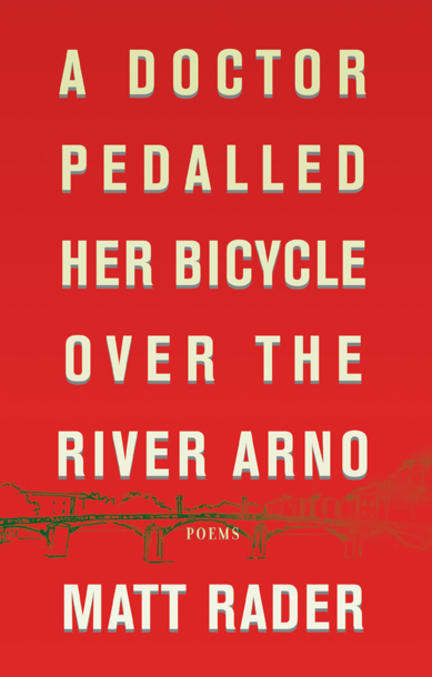 A Doctor Pedalled Her Bicycle Over the River Arno carries within it all the technique, vision, imaginative labour, and razor-sharp precision of Matt Rader’s first two collections, Living Things and Miraculous Hours. But it also ascends to a new and luminous, demanding, particularized realm of the human.

Wildflowers and weeds, newspaper archives and illness, hostels and hostiles, parenting and the shadowy history of grandparents, war and Renaissance paintings: Matt Rader’s unassuming, deeply spirited, and expansive poems show us again how contemporary lyric can go such a long way toward revealing our true homes to us at the moment we find ourselves most nakedly un-housed. Rader seeks out limits, borders, and frontiers -- those mapped for us by authority, and the concomitant, interior shadowlines we ourselves draw -- in order to test their validity.

If Borges had imagined an atlas of our layered identities, it might look like these poems. This is an astounding collection from a thrilling voice in poetry.

Matt Rader is the author of three books of poems: A Doctor Pedalled Her Bicycle Over the River Arno (House of Anansi, 2011), Living Things (Nightwood Editions, 2008), and Miraculous Hours (Nightwood Editions, 2005), which was a finalist for the Gerald Lampert Memorial Award and long-listed for the ReLit Award. His poems, stories and non-fiction have appeared in The Walrus, Prism International, The Fiddlehead, The Journey Prize Anthology, as well as many other publications across North America, Australia and Europe and have been nominated for numerous awards including the Gerald Lampert Award, the Journey Prize and two Pushcart Prizes. His website is www.mattrader.com.

There is an ease and immediacy to Rader's writing that feels as intellectually discerning as it is strangely serendipitous . . . Rader never holds back in substance and is most admirable for bravely risking moments of personal terrain, which are many in this collection.

Other titles by Matt Rader