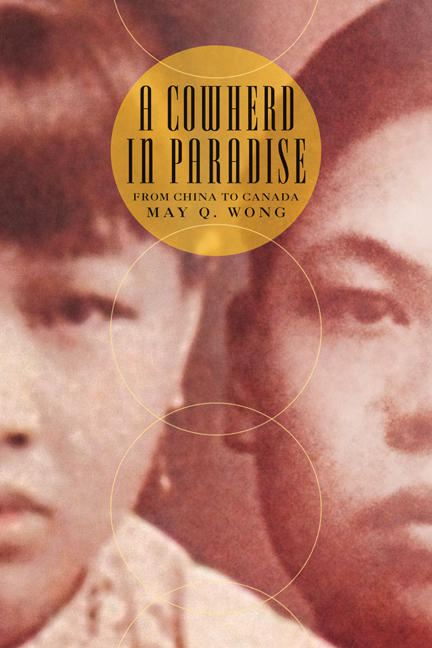 In 2006, the Prime Minister apologized to the Chinese people for the legislated discrimination created by Canada’s head tax laws in the first half of the twentieth century, acknowledging the far-reaching and long-term consequences it has had on their families. A Cowherd in Paradise is the story of one such family.

The book chronicles the remarkable lives of Wong Guey Dang (1902–1983) and Jiang Tew Thloo (1911–2002). Ah Dang was born into an impoverished family and sold as a child. In 1921, his adoptive father paid a five-hundred-dollar head tax to send Ah Dang to Canada. Eight years later, driven to create a family of his own, Ah Dang returned to China, where he chose Ah Thloo as his bride from a matchmaker’s photo.

As a child, Ah Thloo worked as a cowherd and from the age of six was responsible for her family’s fortune—their water buffalo. Ah Thloo not only became a wife and mother, but also grew to be a courageous defender against invaders and a champion of the weak.

Married for over half a century, the couple was forced to live apart for twenty-five years because of Canada’s exclusionary immigration laws. In Canada, Ah Dang became a successful Montreal restaurateur; while in China, Ah Thloo struggled to survive through natural disasters, wars, and revolutions. A Cowherd in Paradise is the moving tale of one couple’s search for love, family, and forgiveness.

May Q. Wong was born to Chinese immigrants and raised in Montreal along "the Main" a major boulevard that connects Canada's most diverse neighbourhoods. Educated at McGill University and the University of Victoria, she spent her career in the British Columbia Public Service working toward improving the lives of those in need. Since retiring in 2004, May has devoted her time to travelling with her husband and writing about the people they have met and the places they have been. Wong is the author of the memoir, A Cowherd in Paradise: From China to Canada and the non-fiction history of Victoria's multicultural past, City in Colour. She lives in Victoria, BC.

A Cowherd in Paradise manages the writerly task of evoking the perilous, impoverished life of peasants in pre-revolutionary China while delving deep into the psyche of an immigrant to Canada during the period of discriminatory head taxes. May Q. Wong has written one of the best descriptions of foot-binding (her grandmother's) that I have ever read. With honesty, Wong also sympathetically recounts the disastrous conjugal encounter between two strangers—her parents—meeting for the first time on their wedding night. Wong's description of the enforced polarization of one nuclear family, set asunder by a Canadian law excluding ethnic Chinese immigrants—no matter if they are wife, daughter, or son—should be required reading for anyone who cares about citizenship and human rights. —Jan Wong, author of Red China Blues

May Q. Wong is featured in the winter issue of Senior Living Magazine.

This is not the work simply of a family archivist but of an author, for it is rooted in empathetic imagination that immerses the reader in emotional experiences . . . [May Q.] Wong's book reminds us of the struggles of others and the need to remain vigilant about government decisions that impact us all—even here in paradise. —Focus

May Q. Wong's A Cowherd in Paradise: From China to Canada was reviewed along side Vincent Lam's The Headmaster's Wager (Random House). Canadian Literature said that they both "offer nothing less than a Canadian ethnic and multicultural history, in which the changing social image of Chineseness is embodied in the existential shifting of individual and family identity." —Canadian Literature

A Cowherd in Paradise: From China to Canada

This engagingly written biography is about the author’s parents and their experiences both living in China in the early 20th century and being immigrants to Canada. Both parents were born during a time of transition from more traditional Chinese society to new forms of government. Wong Guey Dang, her father, joined his adoptive father (who paid the head tax) in Canada as a young man and chose his bride through a matchmaker. After they were married, he returned to Canada and for much of their marriage they rarely saw each other. The book chronicles what was a very common experience for Chinese immigrants at the time.

Although not graphic enough to merit a caution, there is some discussion of sex, foot binding and spousal abuse.

Other titles by May Q. Wong

Rediscovered Stories of Victoria's Multicultural Past