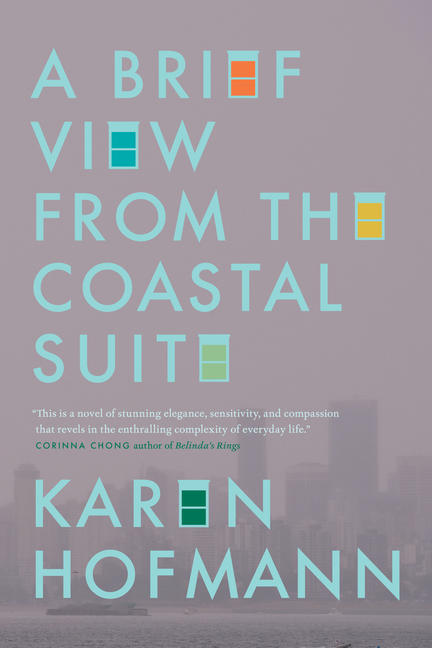 Includes Author-Curated Discussion Questions!
The reunited Lund siblings, separated as children by Social Services, find that family, whether held together by blood or by choice, can be both a curse and a blessing, an obstacle and a point of connection.

Set in Vancouver during the economically turbulent year of 2008, A Brief View from the Coastal Suite explores the Lunds' differing values in respect to relationships, money, and environment – all markers for a materialistic society that is becoming increasingly inhospitable.  Cleo struggles to find time for her challenging job as an architectural designer and for the demands of her family; Mandalay, an artist and single parent, tries to raise her twin sons uncontaminated by the materialistic values of their lawyer father; and Cliff attempts to run a landscape company with his spoiled younger brother, Ben, and to accommodate the ever-increasing demands of his Estonian mail-order bride.

Karen Hofmann’s brilliant sequel to her novel What is Going to Happen Next skillfully explores societal attitudes and the instability of personal and public lives in a world that values money above all else.

Karen Hofmann grew up in the Okanagan Valley and taught creative writing at Thompson Rivers University in Kamloops, British Columbia, for many years. She now divides her time between Vancouver Island and the BC Interior. A first collection of poetry, Water Strider, was published by Frontenac House in 2008 and shortlisted for the Dorothy Livesay Prize. Her first novel, After Alice, was published by NeWest Press in 2014, and a second novel, What is Going to Happen Next, in 2017. Her short fiction has won the Okanagan Fiction Contest three times, and "The Burgess Shale" was shortlisted at the 2012 CBC Short Fiction Contest. Karen Hofmann is an avid walker, and her writing explores the landscapes, both rural and urban, of British Columbia as well as the personalities and social dynamics of the inhabitants. Her latest novel, A Brief View from the Coastal Suite, was released in spring 2021.

Excerpt: A Brief View from the Coastal Suite (by (author) Karen Hofmann)

Excerpt from “Before”
May 18th, 2000
Another wave coming, Cleo says, watching the monitor. They’d decided on wave; Mandalay has practised visualizing the rollers on the beach near Phuket, where she had once flung herself into the bright aquamarine surf.

The gap between the spike beginning to grow on the monitor and the clamping of her spine and stomach is just long enough for a wild hope to surface that it won’t be so painful this time.

Starting to subside, Cleo says, and the deluge of pain briefly abates.

I can’t do this, Mandalay says.

A guttural howl like nothing she’s heard before erupts from her innards. Is that her?

But then she can. Mandalay finds her breath; she pins her attention to it. Her body begins to do what it needs to do. There is much pain, but the pain is not her. She visualizes diving and rolling in the warm waves, at Phuket. The waves had tumbled her over, but she’d learned to give herself over to them, and she would find herself lying in the shallow ebbing water, laughing, after they retreated.

She’d been with Benedict, then. Her last boyfriend before Duane.

Duane isn’t here, now. She can’t imagine him being here, wanting him here. God, no, she’d said, when Cleo had wondered.

She rides the waves and rides them, but then it’s too much, she’s being beaten up, there’s no space to catch her breath. A vortex. Roll with it, she tries to remember, but her body isn’t hers now. She’s lost her tether to it.

Cleo’s nephew slides out head first in a rush of blood and water, a fish, an otter, a wet, red human. He takes a breath.

They let Cleo hold him in a warmed towel for a few seconds, after they suction his nose and mouth. He looks like one of my own children, like Olivia, Cleo says. The nurse takes him from Cleo’s arms and puts him on Mandalay’s chest.

When the nurse puts her son on her chest, Mandalay feels this: that she and he have been travelling towards each other for all time, and have finally arrived.

She’s able to hold to that sweet, calm feeling even when they tell her that the other twin is in trouble, that they can’t wait any longer. It’s not what she wanted, but she understands. Someone lifts her first-born son from her arms, and Cleo is signing a form, and cold disinfectant is being swiped across her belly and she knows that she is going to be anesthetized and cut and it was not supposed to go this way.

But she knows it will be okay.

"The success of such a book depends, of course, on the shrewdness of perception of the author, the accuracy of her ear and eye, as well as the range and depth of her knowledge. In those terms, it’s difficult not to feel that Karen Hofmann has it right. In spades."
~ Theo Dombrowski, The Ormsby Review

“Karen Hofmann’s novels deserve a place on the shelves of discerning readers across the country.... A Brief View from the Coastal Suite ... [is] a rich and vivid read capturing a place in time that serves to illuminate the present moment.”
~ Kerry Clare, Quill & Quire

"Hofmann’s prose is captivating. She excels at writing everyday scenes. Some thrum with tension; others are characterized by warmth. Her characters’ reflections are variously evocative and familiar."~ John J. Murray, Foreword Reviews

Other titles by Karen Hofmann

Brief View from the Coastal Suite, A

What is Going to Happen Next