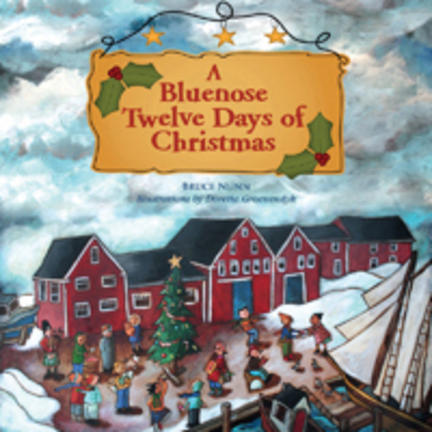 On the fifth day of Christmas,
My true love gave to me Five Highland flings!
Four coal seams,
Three lobster traps,
Two fiddle tunes,
And a Bluenose in at Pier Three.

“The Twelve Days of Christmas” gets a taste of Nova Scotian revelry in this energetic retelling by storyteller Bruce Nunn. With Doretta Groenendyk's charming and funny illustrations, readers young and old will want to read–and sing!–this version of the carol every Christmas.

Bruce Nunn is a popular storyteller and the author of seven books, including Nova Scotia History with a Twist, More History with a Twist, Buddy the Bluenose Reindeer, and Buddy the Bluenose Reindeer and the Boston Christmas Tree Adventure. His Nova Scotia history stories have aired on CBC Radio and Television, earning him an Atlantic Journalism Gold Award; on the Rick Howe Show on News 95.7FM Radio in Halifax; and they've appeared in the Halifax Herald and the Halifax Daily News.

Doretta Groenendyk, a painter, writer, and teacher, lives with her husband and three children on a small spot of land in the Annapolis Valley, Nova Scotia. Doretta is the author and illustrator of several children’s books by both The Acorn Press and Nimbus Publishing. Snow for Christmas, Thank You for My Bed, and I’m Drawing a Picture, have been shortlisted for the Lillian Shepherd Memorial Award for Illustration. She also co­wrote Spin to Sea with her daughter Izra Fitch.

Other titles by Bruce Nunn

And the Christmas Dinner Rescue

And Other Christmas Stories from Atlantic Canada

Best of Buddy The Bluenose Reindeer

Stories of the Remarkable,the World-Famous and the Strange

Nova Scotia History With A Twist

Buddy the Bluenose Reindeer and the Boston Christmas Tree Adventure

More History with a Twist

Other titles by Doretta Groenendyk

You Make Me Happy

Love You More than Anything

A Harbour Seal in Halifax