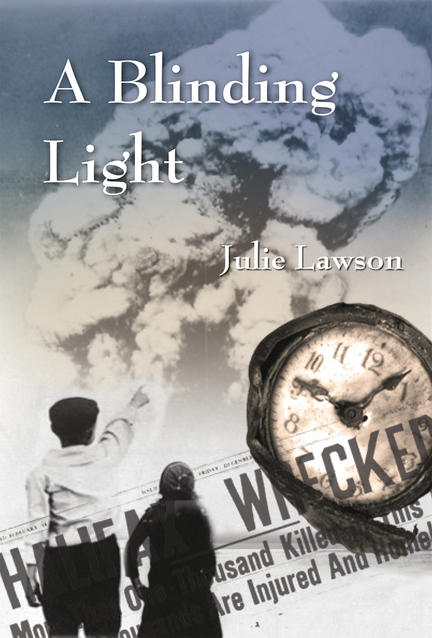 It's 1917 in Halifax, Nova Scotia. The First World War is raging, and despite its distance from the conflict, the Halifax Harbour is bustling with activity. Anti-German prejudice is rampant, and though 12-year-old Maddie Schroeder and her 15-year-old brother Will are still mourning the loss of their father, who died in a mysterious boating accident just six months before, his German heritage doesn't merit them much sympathy. The rumours he'd been a German spy are only flamed by his disappearance.

On the morning of December 6, while Maddie is in Richmond begging forgiveness from the Schroeders' former housekeeper, Will is atop Citadel Hill reporting for the school paper, when he sees two ships collide. A flash of light, then thunder from underground: the Halifax Explosion hits. Instantly, the city is unrecognizable. Lost and separated in the dark, destroyed city, will the siblings find each other again? Where is their mother? And who is to blame for the catastrophe?

In A Blinding Light , award-winning author Julie Lawson (No Safe Harbour) tells a riveting story of the Halifax Explosion and its aftermath, exploring the concepts of guilt, blame, and taking ownership, the divide between the rich and poor, locals and immigrants, as well as the human bonds that arise in times of tragedy. Young readers will be spellbound, and teachers and librarians will find plenty of topics for discussion in the book's historical and cultural lessons.

Seeds of a Story: Kids' Book Nominees Tell All

From Beyonce's "Lemonade" to Sigur Ross, a game of shinny in the woods, a grandfather stationed on a training vessel during the Halifax Explosion, and …