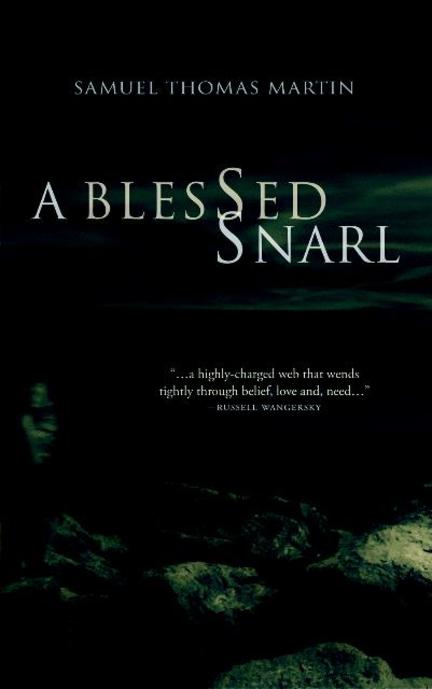 Patrick Wiseman moved his wife and son back to Newfoundland to start a new Pentecostal church, but when his wife Anne leaves him for a man she meets on Facebook and his son Hab moves in with his girlfriend Natalie—a burgeoning alcoholic with a fiery past—Patrick takes a suicidal leap of faith that brings him face to face with his estranged father Des, a Catholic mystic who might be covering up an old crime. While Patrick wrestles to come to terms with his failed marriage, Hab struggles to hang on to his tenuous relationship with Natalie. But when a woman is almost burned alive in a nearby house fire and a neighborhood drunk is beaten within an inch of life, Hab begins to wonder if Natalie and her housemate Gerry know more than they let on.

Samuel Thomas Martin is from Gilmour, Ontario. He received his MA in Creative Writing from the University of Toronto where he worked with David Adams Richards. He enjoys hiking, canoeing and exploring his new home in St. John’s, Newfoundland, where he lives with his wife Samantha and their dog Vader.

“Samuel Thomas Martin's debut novel dives right into the densest mysteries of life—the "blessed snarl" of its title. The novel is woven with opposing convictions: Catholicism and Protestantism, murder and innocence, the spirituality of art and of speaking in tongues—a warp and weft that is pulled tight by anger and let loose again by grief. All this set into an icy Newfoundland landscape that wreaks its own chaos on its inhabitants … Despite the heaviness of the material, Martin's fine hand with characterization makes moments of longed-for reunion ring true… ”

“I’m capable of being critical… but when I read a thoughtful novel like A Blessed Snarl, I simply stand and applaud. I might even be tempted to call Martin’s accomplishment anointed.”

"... so skillfully composed it is an effortless read, and a gripping one. The dialogue is spot-on and events unfold with realism and momentum." "A Blessed Snarl is a merging, even collision, of the high and low, saints and back alleys, bile and grace. It is crafted with compression and compactness. It shows a gritty urban world. But one where there is humour, generosity, and mercy."

“Martin has a certain knack for writing out and excavating the things in life that are difficult to read, let alone experience… This human struggle, what Martin seeks to portray most of all, is explored in a remarkably sensitive, observant manner, and is often gritty, disturbing, nerve-wracking, and heartbreaking but also breathtakingly satisfying.”

Other titles by Samuel Martin