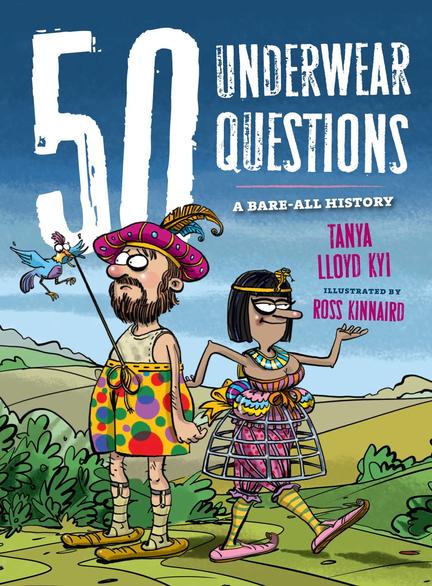 Most of us take our underwear for granted, but throughout history our undies have revealed a lot about who we are (king or peasant), how we work (in fields or factories) or the shapes we value (manly calves or tiny waists).

The third book in Annick’s 50 Questions series tackles questions such as “What’s that smell?” (Medieval Europeans thought bathing made you sick) and “Did boxers arrive in the Nick of time?” (When blue jean model Nick Kamen stepped out of his denims to reveal his boxers, sales of the underwear soared.)

Underwear has played a role in ancient crusades, city sieges and even modern economic predictions. Obviously, it’s time to uncover the facts about everything from loincloths and T-shirts to bloomers and lingerie. Young readers will laugh their pants off at the accompanying cartoons and get the bare, but fascinating, facts about the history of our unmentionables.

Tanya Lloyd Kyi has written over fifteen books of fiction and nonfiction for middle-grade and young-adult readers, including many award winners. Her recent titles for Annick Press include Extreme Battlefields: When War Meets the Forces of Nature (2016), DNA Detective (2015), and When the Worst Happens: Extraordinary Stories of Survival (2014). Tanya lives in Vancouver, British Columbia, with her husband and two children.

Ross Kinnaird is an illustrator who has worked in London, Sydney, and Hong Kong. He currently lives in Auckland, New Zealand.

“... will work as a fabulous booktalk for librarians looking for something fun and different to expand their nonfiction repertoire.”

50 Underwear Questions: A Bare-All History is Tanya Lloyd Kyi’s second book in Annick Press’s bouncy Question series. Kyi offers a “timeline that stretches through the centuries like a very long piece of waistband elastic” and peeks under hemlines around the globe.

Kyi not only gives snappy facts about the development of Lycra and other topics, but also challenges readers to think about important fashion and social themes. She shows how sports, for example, gave rise to long johns, worn in the style of boxer John L. Sullivan. Kyi also points out that female undergarments — crinolines and panniers — influenced ‘broad’ changes in interior designs (wider doorways). Kyi writes well, selecting words that literally help illustrate her topic. Illustrator Ross Kinnaird, of New Zealand, makes the comic best out of phrases such as “1980s: boxer shorts rise up the flag pole of popularity.”

Perhaps it is unavoidable that a book with illustrations of bras and terms such as “crotch,” “breast” and “genitals” will engender middle-grade giggles. While the book holds no inappropriateness in the mind of this reviewer, it is useful to point out that readers need to be able to decode such terms as “loincloth” and “cachesexe.” A glossary and historic images of artifacts might have been helpful. Annick has, however, allotted generous space for a fine index, ideas for further reading and a bibliography. The fresh undies-on-the-clothesline page treatment by book designer Irvin Cheung supports the comic illustrative adornment, the timeline theme and the bold, upbeat writing in this well thought-out approach to the history of underwear.

Uncover the facts about everything from loincloths to lingerie in this book filled with hilarious cartoons and fascinating facts about the history of our “unmentionables.” Learn more about men’s garters, breeches and woolly full-body suits; women’s corsets, petticoats, bloomers and bras; and underwear customs from around the world.

Other titles by Tanya Lloyd Kyi

When the Worst Happens

(My Time as Caz Hazard)

Lowdown on Denim, The

Other titles by Ross Kinnaird

A Blizzard of Blistering Facts

A Book With Bite

A Sizzling History of Fire