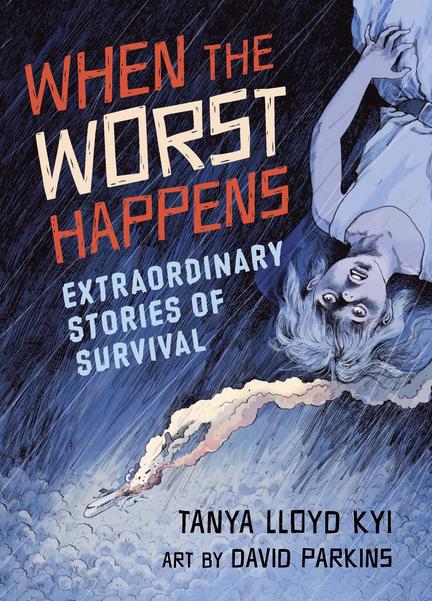 People overcome impossible odds where others surrendered and failed.

What would you do if you were stranded or trapped in a situation where you had to fight for your life? When the Worst Happens is a collection of intense, true stories set in distant corners of the earth.

After a fierce storm, the crew of the Polaris was stranded on an ice floe in the Arctic Ocean. A massive cave-in traps 19-year-old Jimmy Sanchez and 32 other Chilean miners deep below the earth. Twelve-year-old Bala and his two sisters must survive on a tiny island off the Australian coast after their boat capsizes. When her plane crashes in the Peruvian jungle, 17-year-old Juliane struggles to find help.

In extreme situations such as these, people can pull together, show almost super-human skill, and survive. But sometimes they face madness, greed or mutiny. These action-packed accounts reveal the critical decisions that determined the fate of each victim.

In an attempt to answer the question why people react the way they do in extreme circumstances, When the Worst Happens also looks at modern psychological studies, interesting historical details and settings, as well as seemingly unrelated events, to discover what draws the line between success and tragedy.

Graphic icons point readers to successful or poor decisions as each story unfolds, and outstanding illustrations capture the real-time developments in each riveting story.

Tanya Lloyd Kyi is the popular award-winning author of both fiction and non-fiction for young readers, including 50 Body Questions and 50 Underwear Questions. She lives in Vancouver, British Columbia.

David Parkins does editorial cartoons for The Economist, cartoon strips, and has illustrated numerous children's books. Born in the UK, David now resides in Canada.

Tanya Lloyd Kyi
grew up in Creston, B.C. She began her writing career as a high school poet, producing pages and pages of work that her mother loved and her best friend religiously archived (possibly for a future blackmailing scheme). The original edition of Canadian Girls Who Rocked the World was Tanya's first book for young readers. She has since published nine other titles, including Canadian Boys Who Rocked The World, which was short-listed for the Silver Birch Award by the Ontario Library Association. Tanya now lives in Vancouver, B.C.

Phyllis Root is the author of BIG MOMMA MAKES THE WORLD and many other award-winning books for children. She says, " Aunt Nancy is my grandmothers and aunts — women who never let the world get the better of them — all rolled into one." She lives in Minneapolis.
David Parkins has illustrated numerous books for children, including WEBSTER J. DUCK by Martin Waddell and Egyptian Diary by Richard Platt. He lives in Lincoln, England. C

Other titles by Tanya Lloyd Kyi

How Girls Are Using Social Media for Good

(My Time as Caz Hazard)

Lowdown on Denim, The

Other titles by David Parkins

To the Rescue! Garrett Morgan Underground

The Journal of Iliona, A Young Slave

Elisha Otis's Trip to the Top