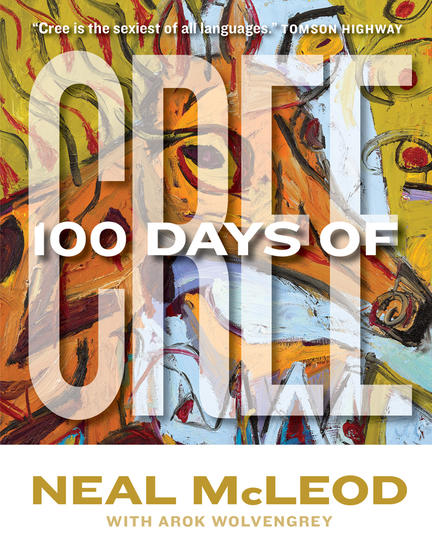 As an Elder once said, "Learn one Cree word a day for 100 days, and emerge a different person."

In 100 Days of Cree Neal McLeod offers a portal into another way of understanding the universe-and our place within it-while demonstrating why this funny, vibrant, and sometimes salacious language is "the sexiest" of them all (according to Tomson Highway).

Based on a series of Facebook posts, the 100 short chapters or "days" in the book present chains of related words, some dealing with the traditional -the buffalo hunt, the seasons-and others cheekily capturing the detritus of modern life-from internet slang to Johnny Cash songs to Viagra.

The result is both an introduction to the most widely spoken Indigenous language in Canada and an opportunity to see the world, and ourselves, in another way.

Neal McLeod is half Cree (having grown up on the James Smith reserve in Saskatchewan) and half Swedish having had the fortunate opportunity to study abroad at the Swedish Art Academy at Umeå . Neal’s first book of poetry entitled, Songs to Kill a Wîhtikow, was nominated for several Saskatchewan book awards including book of the year in 2005 and book of year at the Anskohk McNally Aboriginal Literature Awards. In 2007, he also published Cree Narrative Memory, which was nominated for book of the year at the Anskohk McNally Aboriginal Literature Awards. In the fall of 2008, he published his second book of poetry entitled Gabriel’s Beach. He teaches Indigenous Studies at Trent University in Peterborough, Ontario.

Arok Wolvengrey is Department Head, Associate Professor, and Linguistics Program Coordinator at the First Nations University of Canada in Regina.

Other titles by Neal McLeod

From Treaties to Contemporary Times

Songs to Kill a Whitikow

I Come from a Long Time Back

The Beginning of Print Culture in Athabasca Country

A Facsimile Edition & Translation of a Prayer Book in Cree Syllabics by Father Émile Grouard, OMI, Prepared and Printed at Lac La Biche in 1883 with an Introduction by Patricia Demers