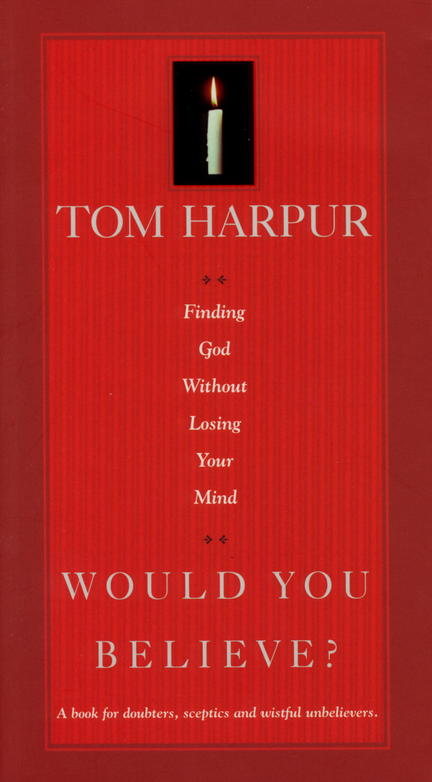 A hundred years ago, most people accepted without question what their priest or rabbi or imam taught them about God, but many people today, educated to think for themselves, find that the concepts of God taught by the world’s major religions either insult or contradict their intelligence. At the same time they find that having no faith has left a yawning spiritual void in their lives. In Would You Believe?, Tom Harpur deals with the tough questions raised today by real people, such as how to reconcile the presence of evil, pain and suffering with belief in a loving God.

The challenge we face, Harpur writes, is not to find a substitute but to rediscover God under the encrustation of ritual and doctrine that the various faiths have built up. We can go beyond all narrow-minded claims of being the only true religion, the only correct interpreter of God, he says, when we understand that all faiths are simply routes towards God that humans have been inspired to create. We can use our intelligence to believe in God, rather than deny it in order to swallow notions devised for a different people and a different time.

Tom Harpur, columnist for the Toronto Star, Rhodes scholar, former Anglican priest, and professor of Greek and the New Testament, is an internationally renowned writer on religious and ethical issues. He is the author of ten bestselling books, including For Christ’s Sake and The Pagan Christ. He has hosted numerous radio and television programs, including “Life After Death,” a ten-part series based on his bestselling book of the same name.

“With the intelligence [Harpur] brings to bear in thinking about God, one is more tempted to believe.”
–London Free Press

“Harpur speaks to the growing number of people who have drifted away from the religion of their parents and who now face a spiritual vacuum.”
–Southam News

Other titles by Tom Harpur

My Journey from Fundamentalism to Freedom

There Is Life After Death

An Empowering Vision of the Gospels

The Spirituality of Wine