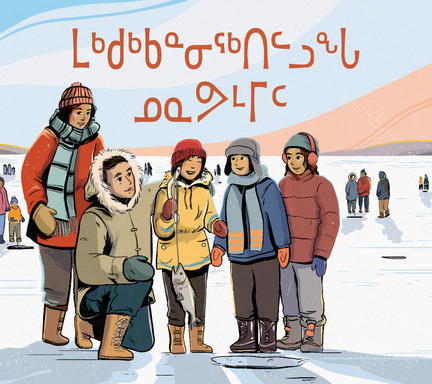 In Nunavut, there are lots of fun things to do, no matter the season. This book introduces children to the memoir genre and describes different activities the author did when she was growing up in Nunavut.

Deborah Kigjugalik Webster grew up in Baker Lake, Nunavut, where she loved to learn about her Inuit culture and heritage. She has a degree in Anthropology from Carleton University in Ottawa, Ontario, and works as an Inuit heritage researcher and author. The lack of published children’s literature featuring Inuit content compelled Deborah to write "Akilak’s Adventure" for her daughters, Sonja Akilak and Nicole Amaruq. Reading and making up stories with her daughters when they were young was a magical time in Deborah’s life, and she took inspiration from their vivid imaginations and sense of wonderment and excitement.

Natasha Donovan is the illustrator of the award-winning Mothers of Xsan series (written by Brett Huson). She illustrated the graphic novel Surviving the City (written by Tasha Spillett), which won a Manitoba Book Award and received an American Indian Youth Literature Award (AIYLA) honor. She also illustrated Classified: The Secret Career of Mary Golda Ross, Cherokee Aerospace Engineer which won an Orbis Pictus Honor Book and an American Indian Youth Literature Award (AIYLA). Natasha is Métis, and spent her early life in Vancouver, British Columbia. Although she moved to the United States to marry a mathematician, she prefers to keep her own calculations to the world of color and line. She lives in Washington. www.natashadonovan.com

Other titles by Natasha Donovan