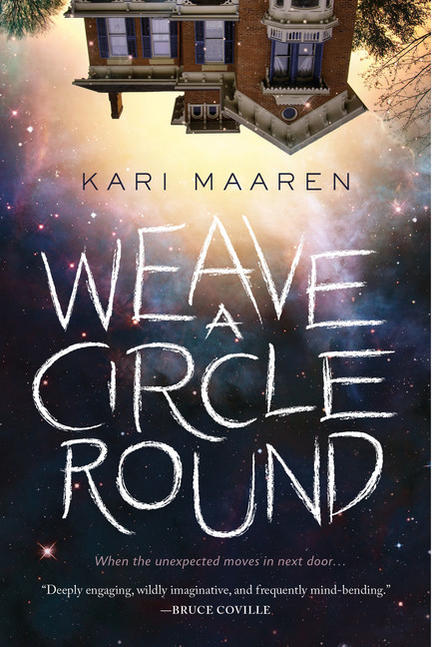 Discover your inner child once again inWeave a Circle Round, a debut fantasy adventure for fans of Madeleine L'Engle, Diana Wynne Jones, and E. L. Konigsburg. Now nominated as a finalist for the Andre Norton Award for Outstanding Young Adult Novel!
When the unexpected moves in next door, anything can happen inWeave a Circle Round, Kari Maaren's debut in this YA-friendly fantasy adventure.
Freddy doesn’t want people to think she’s weird. Her family makes that difficult, though: her deaf stepbrother Roland’s a major geek, and her genius little sister Mel’s training to be the next Sherlock Holmes. All Freddy wants is to survive high school.
Then two extremely odd neighbors move in next door.
Cuerva Lachance and Josiah definitely aren't normal. Neither is their house, which defies the laws of physics. Neither is Freddy’s situation, when she suddenly finds herself stuck thousands of years in the past with her very, very weird neighbors. And that’s only the beginning.
“I adored this brilliant book from start to finish. It left me reeling with delight and I can't wait for the rest of the world to get as lost in its pages as I was.” —Charles de Lint
“I'd have loved this book when I was twelve, and I love it now.” —Nebula, Hugo, and World Fantasy-Award winning author Jo Walton

KARI MAAREN is a Toronto-area writer, award-winning musician and cartoonist, and academic. She created the webcomicsWest of Bathurst andIt Never Rains, and is also known as a musician for her popular song "Beowulf Pulled Off My Arm."Weave a Circle Round is her first novel.

“Kari Maaren'sWeave a Circle Round is deeply engaging, wildly imaginative, and frequently mindbending. Its central mystery grows ever more perplexing as the book hurtles toward its remarkable climax, with final pages that will have readers turning back to the beginning to see how the author has indeed woven her enchanted circle.” —Bruce Coville
“I adored this brilliant book from start to finish. It left me reeling with delight and I can't wait for the rest of the world to get as lost in its pages as I was.” —Charles de Lint
“Wonderful characters, masterful control of material and a refreshingly different kind of plot. I'd have loved this book when I was twelve, and I love it now.” —Nebula, Hugo, and World Fantasy-Award winning author Jo Walton
“Reminiscent of Diana Wynne Jones, what starts out as the simple tale of some wacky neighbors soon takes a far more epic turn, as Maaren leads you deep into the heart of her own fascinating mythology. Maaren understands the power of stories—and the danger of them, too.”—Marie Brennan, World Fantasy Award finalist of The Memoirs of Lady Trent series
“Kari Maaren'sWeave a Circle Round is a delightful debut sure to enchant young adults and older ones who appreciate their literature. It rings many of the same chimes asThe Phantom Tollbooth andA Wrinkle in Time, with a few notes charmingly reminiscent of Monty Python, while singing its own intriguing song. Maaren demonstrates impressive respect for both her characters and her readers, weaving challenging concepts (Kublai Khan?!] into accessible, fun dialogue and narration. I found myself feeling the same excitement I first experienced upon reading time-travel tales long ago, which is a magical thing indeed.” —Elizabeth Haydon, author of The Lost Journals of Ven Polypheme series
“Weave a Circle Round is a marvelous, brainy romp through history and myth. This is a true puzzle-box of a story, as fun to solve as it is to read.” —Sarah Henstra, author ofMad Miss Mimic
“InWeave a Circle Round, fourteen year old Freddy Duchamp is sent hurtling through human history, caught in time with a boy she barely knows and cannot trust. How can she find out who Josiah is, what he's hiding, and whether he poses a threat to her family? She can't even get back to the twenty-first century and her horribly boring high school English class! Kari Maaren's witty, cliche-skewering debut novel is a vivid picture of a blended family in turmoil, an intricate temporal puzzle box, and a grand adventure.” —A.M. Dellamonica, author of The Nature of a Pirate
“Congratulations, dear reader - you've just rolled a 2o!Weave A Circle Round is a trope-defying, endlessly entertaining romp. Maaren's wry sense of humour and crisp prose make this refreshing tale of destinies gone haywire an absolute must-read.” —Charlene Challenger, author ofThe Myth in the Distance
“Weave a Circle Round draws the reader down a crooked pathway full of sharp turns and daunting obstacles. The thought-provoking story engages both heart and mind as we live every challenge with Freddy and her unusual companions. A real box of surprises, this novel deserves to become a YA classic.” —Juliet Marillier, Aurealis-Award winning author of the Sevenwaters series
“Impossible sand, unfinished poems, Vikings, borks, dangerous deities, grade 9: Freddy Duchamp encounters all of these and more in the headlong adventure that isThe House on Grosvenor Street.In Freddy, Kari Maaren has created an unforgettable, totally unique character: wry and scared, lonely and stubborn, angry and hopeful--but above all, determined to solve the mysteries she stumbles over, again and again, as she flits through time. The biggest mystery of them all is how she fits in--and the solution is as surprising as it is satisfying. This is a wonderful debut novel. I can't wait for Maaren's next." —Caitlin Sweet, authorThe Door in the Mountain
“A charming, extraordinarily relatable book with the potential to become a timeless classic.”—Kirkus Reviews, starred review
“Dazzling...a fanciful odyssey through the past and future. This is an ambitious, intricate, joyful coming-of-age tale, with memorable characters and a powerful sense of wonder.”—Publishers Weekly, starred review
“Maaren’s characters are by turns charming, annoying, and frequently hilarious. The quick pace and dialog may remind readers of Madeleine L’Engle or Jasper Fforde, making the protagonists timeless in their own way. With definite YA crossover appeal but enough action and intrigue for adults, Maaren’s enchanting debut is for anyone who enjoys stretching their imagination or is nostalgic for their teenage years.”—Library Journal, starred review
“This is one of those rare books that surprises readers at every turn because Maaren’s deft writing keeps the story impossible to predict. Although the cast of characters is big and the science mind-bending, readers will relate to awkward Freddy’s desire to fit in and the coming-of-age lessons she learns from each character on her path. Ultimately, the theme of being true to yourself and yet still kind to others will resonate with young people. This wildly imaginative book deserves tobe on every YA fantasy shelf.”—School Library Journal, starred review
“This appealing story reinforces the power of choice and responsibility in the midst of frightening circumstances, speaking to teen and adult readers alike, all of whom will appreciate the author’s attention to Freddy’s emotional journey as well as to fantastical details.”—RT Book Reviews, four stars
“Tantalizing questions to hold readers’ attention to the end...Intriguing.”—Booklist
“A novel that challenges and delights at every turn...It's a fantasy novel that is aware of fantasy novels and manages to create something new and powerful.” –The Globe and Mail

A recommended reading list by author of the new book Lent.

Sarah Henstra on The Red Word

The Red Word has been lauded by no less than Tom Perrotta as "the smartest, most provocative novel I’ve read in a long time."