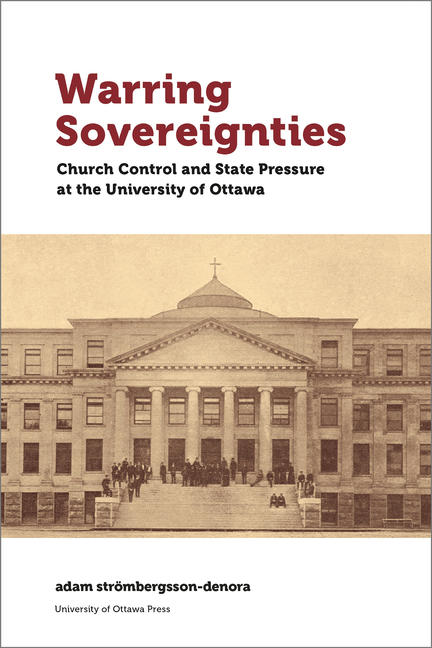 Warring Sovereignties explores the battle between religious and non-secular cultures for control of the university in the 1960s.

Canon law, with particular emphasis on Oblate norms, was a clear expression of Catholic sovereignty in the university. While this sovereignty conditioned Oblate governance choices, the Government of Ontario became increasingly keen on reforming the University of Ottawa into a non-denominational corporation.

Government pressure was coupled with shifting cultural expectations of the university’s social role, while an increasingly lay professorate helped put pressure on the Oblates from within. These twin pressures for removing religious control irked the Oblates, who put up stiff resistance, betraying their reticence to the liberalization of higher education. While the government valued social policy, the Oblates focused on educating individuals.

Although the Oblates ultimately lost, history is as relevant as ever, and this book comes at a time when social planning is becoming increasingly prevalent within universities.

Currently a law student, Adam P. Strömbergsson-DeNora took his BA and MA in English literature at the University of Ottawa. His scholarly interests focus on the intellectual and legal history of church–state relations and parliamentary government.

“’A more skeptical view (…) explains the current managerial state of higher education in this province as the result of competing fields of power. These were evidenced within and without the University of Ottawa as it moved towards a non-denominational university. This dour perspective pitted nominally papal and Ontarian sovereignties against each other in a battle that was being simultaneously fought across Canada—and, in fact, across the Western world—for a more distinct separation of Church and state.’’