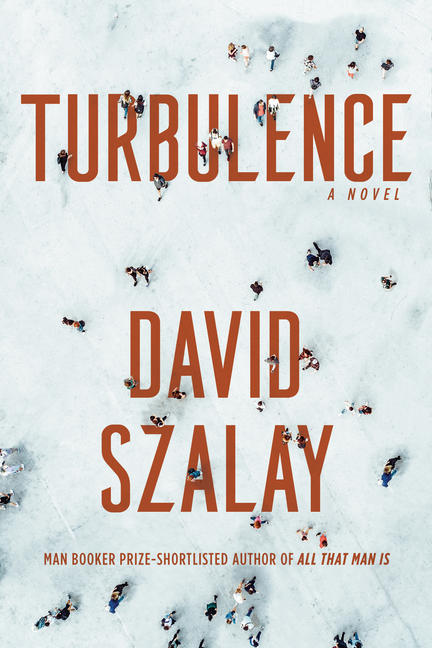 From the acclaimed, Man Booker Prize-shortlisted author of All That Man Is, a stunning, virtuosic novel about twelve people, mostly strangers, and the surprising ripple effect each one has on the life of the next as they cross paths while in transit around the world.

A woman strikes up a conversation with the man sitting next to her on a plane after some turbulence. He returns home to tragic news that has also impacted another stranger, a shaken pilot on his way to another continent who seeks comfort from a journalist he meets that night. Her life shifts subtly as well, before she heads to the airport on an assignment that will shift more lives in turn.

In this wondrous, profoundly moving novel, Szalay's diverse protagonists circumnavigate the planet in twelve flights, from London to Madrid, from Dakar to Sao Paulo, to Toronto, to Delhi, to Doha, en route to see lovers or estranged siblings, aging parents, baby grandchildren, or nobody at all. Along the way, they experience the full range of human emotions from loneliness to love and, knowingly or otherwise, change each other in one brief, electrifying interaction after the next.

Written with magic and economy and beautifully exploring the delicate, crisscrossed nature of relationships today, Turbulence is a dazzling portrait of the interconnectedness of the modern world.

DAVID SZALAY is the author of four previous works of fiction including London and the South-East, for which he was awarded the Betty Trask and Geoffrey Faber Memorial Prizes, and All That Man Is, for which he was awarded the Gordon Burn Prize and Plimpton Prize for Fiction, and shortlisted for the Man Booker Prize. Born in Canada, he grew up in London, and now lives in Budapest.

On the way home from the hospital, she asked him if he wanted her to stay. 'No, I'll be fine,' he said.

She asked him again later that afternoon. 'I'll be fine,' he said. 'You should go home. I'll look at flights.'

'Yes, I'm sure. I'll look at flights,' he said again, and he already had his laptop open.

She stood at the window, unhappily eyeing the street. The view of semi-detached Notting Hill villas and leafless little trees was very familiar to her now. She had been there for more than a month, living in her son's flat while he was in hospital. In January he had been told he had prostate cancer – hence the weeks of radiotherapy in St Mary's. The doctor had said they would now wait a month and then do some scans to see if the treatment had been successful.

'There's one tomorrow afternoon, at fiveish,' he told her. 'Iberia. From Gatwick to Barajas. Is that okay?'

She had been privately wondering whether to make the journey by train and ferry. She told herself not to be silly. She knew it was silly, her fear of flying. The statistics spoke for themselves. 'Yes,' she said. 'That's okay.'

She turned to face the living room again. Jamie was on the sofa, twisted sideways over the laptop, tapping at it. He had lived in this flat for decades, since his early twenties, all his adult life. There was something neurotic, she thought, about his unwillingness to move. He was in his fifties now, which was strange. She still thought of him as someone young.

'Okay,' he said, shutting the laptop, 'that's sorted,' and she thought how easy it was, these days, to do that – to acquire a plane ticket, to travel around.

He insisted on accompanying her to the airport. They took the Gatwick Express, didn’t speak much, and parted when she went through security. She was tearful, which wasn’t like her. A minute later, in the snaking security queue, she turned, hoping to find him still there. He wasn’t there, and she had the feeling, as if seeing the future, that he was going to die of his illness, that he would be dead within a year. She was still trembling with the force of the sensation as she struggled with the large plastic tub and took off her shoes.

Once she was through security, she went straight into one of the fake pubs in the departure lounge for a Bloody Mary.

She had a second Bloody Mary and then, when her flight was announced, walked to the gate. It turned out to be a significant distance. When she arrived there were a large number of people already queuing there – more, she thought, than the plane would be able to hold. She wondered if they would need volunteers to stay behind. They didn’t. She was in a window seat. She looked out at the low sunlight on the grey tarmac. The plane started to move.

It seemed to be in some sort of queue itself – in regular sequence, the rumble of jets arrived faintly from somewhere she couldn’t see.

The tedium of all this had almost succeeded in sedating her when the pilot’s voice, momentarily present in the cabin, muttered, ‘Prepare for take-off.’

She felt the fear then, even through the vodka, surging up like the sound of the engines in a series of well-defined stages – first one kind of loudness, then another, as she was pressed into her seat and the safe world went past in the window. She never quite believed, at this point in the process, that the plane would take off. She always found herself thinking: Surely it should have happened by now, something must have gone wrong – and so it always took her by surprise, it was always somehow a profoundly surprising moment when the plane’s nose lifted, when the plane pulled itself free of the earth – or the feeling was actually more like the earth was falling away.

Sussex was already quite far down, a bluish patchwork of fields in the dusk.

There was, from somewhere, a quiet ping.

She did not know whether it soothed her or not, that ping. She wondered what it meant. Though it seemed to say that everything was happening normally, it probably meant nothing.

She looked around, as if surprised that she was still alive, and for the first time she noticed the man in the seat next to her.

He was sitting very still with his hands knitted loosely in his lap, staring straight ahead. Perhaps he too was trying to master his fear.

She was going to have to ask him to move at some point.

"There's not an ounce of fat to be found, as decades of emotion hang in the spaces between the short, declarative sentences." —The Guardian

"Szalay's gift for inhabiting entirely different lives is as remarkable and spooky as ever." —The Times

"A portrait of our species at a time of crisis . . . Szalay is our greatest chronicler of these rootless, tradeworn places, and the desperate, itinerant lives of those who inhabit them." —The Observer

"Ingenious. . . . Stark and spare, Turbulence is an impressive novel." —The Spectator

Other titles by David Szalay