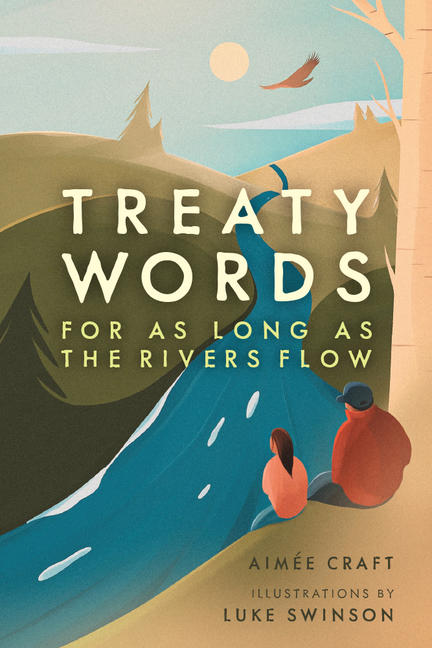 The first treaty that was made was between the earth and the sky. It was an agreement to work together. We build all of our treaties on that original treaty.

On the banks of the river that have been Mishomis’s home his whole life, he teaches his granddaughter to listen—to hear both the sounds and the silences, and so to learn her place in Creation. Most importantly, he teaches her about treaties—the bonds of reciprocity and renewal that endure for as long as the sun shines, the grass grows, and the rivers flow.

Accompanied by beautiful illustrations by Luke Swinson and an author’s note at the end, Aimée Craft affirms the importance of understanding an Indigenous perspective on treaties in this evocative book that is essential for readers of all ages.

Aimée Craft is an Indigenous (Anishinaabe-Métis) lawyer (called to the Bar in 2005) from Treaty 1 territory in Manitoba. She is currently an Assistant Professor at the Faculty of Common law, University of Ottawa. Craft is the former Director of Research at the National Inquiry into Missing and Murdered Indigenous Women and Girls and the founding Director of Research at the National Centre for Truth and Reconciliation. Her book, Breathing Life into the Stone Fort Treaty: An Anishnabe Understanding of Treaty One (2013) won the Eileen McTavish Sykes Award for Best First Book.

Luke Swinson is an Anishinaabe illustrator who is a member of the Mississaugas of Scugog Island First Nation. He lives in Kitchener, ON.

“Elegantly reveals the intended beauty and harmony of a treaty from an indispensable Indigenous perspective.”

“The reverence . . . comes through in Aimée Craft’s words, resonant and weighty, steadfast and dynamic.”

“This exemplary narrative nonfiction book proves an understanding of Indigenous perspectives on treaty relationships, affording vital—and not often heard—historical and cultural context to these living agreements.”

“Craft’s writing is almost faultless. Her lyrical and evocative word choices are ideal for reading aloud in order to enjoy the rhythms of the poetic language. . . . Swinson’s illustrations augment the sense of love and respect conveyed by the words. . . . Highly recommended.”

“This quiet contemplative account of learning to live with nature and together as people has a place in every collection, and while its meditative tone will appeal to older and more advanced readers, it could be the centerpiece of a story hour for younger listeners.”

Other titles by Aimée Craft

Indigenous Resurgence in an Age of Reconciliation

Indigenous and Settler Approaches to Implementing the TRC's Calls to Action

A Knock on the Door

The Essential History of Residential Schools from the Truth and Reconciliation Commission of Canada, Edited and Abridged

An Anishnabe Understanding of Treaty One