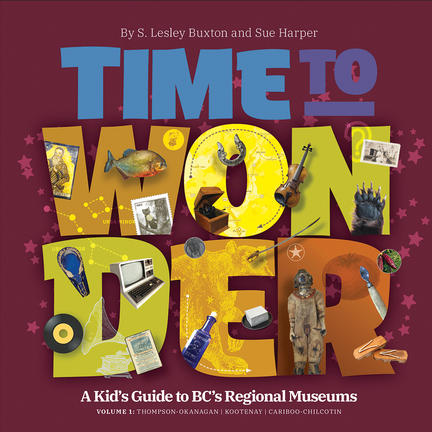 A dynamic, exciting, and full-colour guidebook designed for kids and families looking for adventure throughout the interior of British Columbia.

Go on… be a time traveller, an anthropologist, an archeologist, an artist, or an explorer! Be everything at once! When you visit a museum, you enter an amazing world where you are limited only by your imagination. The books in the Time to Wonder series give adventurous families a backstage pass to explore behind the scenes in regional museums throughout British Columbia.

All will be revealed with the help of dozens of colour photographs, regional maps, lists of activities, historical information, and interviews with a team of amazing experts who specialize in a variety of regions throughout the interior of British Columbia. Whether families are experienced museumgoers or just curious about something new, this is a book they will read over and over.

Suzanne Harper is a retired secondary school teacher who has a BSc in psychology, an MA in English Language and Literature, and an MFA in Creative Nonfiction from the University of King’s College in Halifax. She has published 10 educational textbooks for the Ontario secondary English curriculum and has written three titles targeting reluctant readers as part of The Ten series published by Scholastic. Her writing can also be found in a number of magazines, including NUVO Magazine, Okanagan Life, Okanagan Arts, Kelowna’s Daily Courier – Sunday Edition, and BC Food and Wine Trails. Suzanne lives in Kelowna, British Columbia.

Lesley Buxton studied acting at Mountview Theatre School in London, England, and has an MFA in Creative Nonfiction from the University of King’s College in Halifax, Nova Scotia. Lesley’s first book, One Strong Girl, won the inaugural Pottersfield Prize for Creative Nonfiction. Her essays and short stories have appeared in leading Canadian magazines and anthologies such as Love Me True, Today’s Parent, Reader’s Digest, This Magazine, Hazlitt, The Fiddlehead, and The New Quarterly. Lesley lives in Penticton, British Columbia.