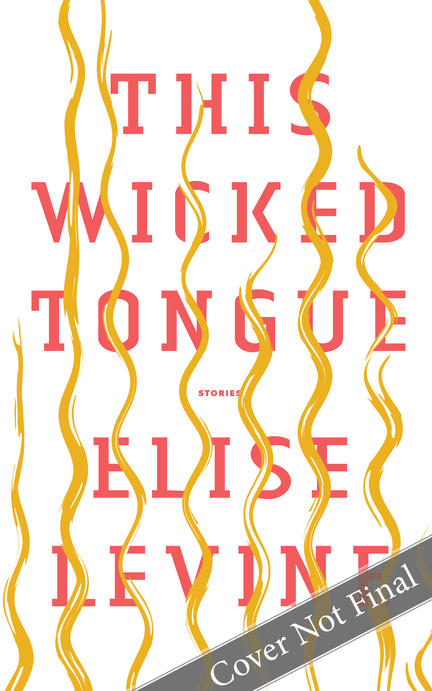 In moments of exile and self-exile, exodus and return, Elise Levine’s uncanny narratives lay bare the secret grammar of their characters’ psyches. An ill-tempered divinity-school candidate refuses to minister to a dying man’s wife; a couple fails to connect as they tour an ersatz cave in the south of France; holy women grieve in medieval England, and a pregnant runaway hitches a ride with a Church leader of dubious intentions. Propelled by their longing for pasts that no longer exist, these reluctant Adams and contemporary Eves confront the unspoken, the maligned, the abject aspects of their inner geographies, mining them for gems that glint and scatter in the light. Uncompromising and honest, lyrical and wry, This Wicked Tongue dares to tell the truth about the places we have come from and the new ones we might find.

Elise Levine is the author of the novels Blue Field and Request and Dedications, and the story collections Driving Men Mad and the forthcoming This Wicked Tongue. Her work has also appeared in Ploughshares, The Gettysburg Review, The Collagist, Blackbird, Best Canadian Stories, and The Journey Prize Anthology, among other publications, and has been named a finalist for Best Small Fictions 2018. She is the recipient of a Canadian National Magazine Award for fiction; awards from the Canada Council for the Arts, the Ontario Arts Council, and the Toronto Arts Council; and residency fellowships from Yaddo, the MacDowell Colony, and the Ucross Foundation, among others. She lives in Baltimore, MD.

Excerpt from This Wicked Tongue

If I moved my head, the air turned dark and blurred my breathing and I felt sick, bad sick.

Are you drinking enough? he said. I told you, keep drinking.

I couldn’t — the water hot as tar. I gave myself up. Whatever happens, I said silently, careful not to move my lips. Better believe I’m yours.

But I faced forward, the better to behold the black and white in front of me. What a world. It was like the heat gave me X-ray vision. A bus breached past, air-conditioned — I could tell because the windows looked sealed and inside people chatted and played cards, ignoring the nothing outside. Twenty minutes later we passed the bus pulled over on the interstate shoulder, engine smoking, suckahs. We snailed on until a stray palm snaked into view — better believe I kept my eyes open — and then an exit, Indio, a gas station where we could fill up and a café where we could eat.

Partway through my burrito I wobbled to the bathroom, thinking I should after all this time. No pee came. My underwear, stretched between my knees, webbed with lines of salt. So much in me.

I flushed though I didn’t have to and struggled to do myself back up. I splashed water on my face. I opened the door to the tiny bathroom. The café wasn’t like what I thought a café should be, candles on the tables and music playing, him facing me.

I moved nearer. His plate lay at his elbow, and by his lowered head and bobbing shoulders it seemed he’d started on mine. Mr. Skinny. I never knew where he put it — bags of corn chips and plastic-wrapped hot dogs and subs, jewel-boxed Krispies washed down with Supersizees, and starting in Oklahoma the biscuits and gravy at Mickey Dee’s. And still his bones left bruises on me each time we joined our hearts together. Always hungry. His thin brown hair matted to his head, sticking up in places like he’d slept in a ditch for a year. The rest of him a scarecrow fixed to poles. Or a scrap of torn plastic bag flapping in a field — I wondered was it ever filled with something, who it used to belong to.

But I loved him, yeah. I felt baggy myself from the drive, my skin too big and stretched over me like a waste of plastic wrap. And that blur so near it felt like any which way.

Dizzy and ditzy are not the same thing. I believe in signs and in knowing what I know despite what anybody tells me. Stubborn bitch, you’re so stupid. Or, Dummy. And those aren’t the worse.

Mostly I lay in the back all the way here, at first sleeping or pretending to, and then with my eyes staring at all I’d never seen before and not ashamed to admit it, once we were a long way from Ontari-ari-ari-o. So much sky, each moment different. When I sat, green hills, sands like the sea. He drove far into the night and I’d wake to pink licking the windows like a thousand wet puppies. I’d manage him apart from me and let myself out. Fog welling in the ditches. I’d walk a few steps and the haze would lift, as if I’d squeezed my last tears and could get on with things. Like a rest stop with clean bathrooms. Truck rigs neatly lined up. Men mostly, asleep. I never felt so safe. When I’d come back to the car and open the door, on my side there’d be food piled from the stash in the trunk, chips and chocolate bars grabbed in quick handfuls, whatever was most convenient at each station while I’d slept, only waking to the gunning engine and the over-lit midnight stores blown behind us like nuclear blooms in old movies — and then the grainy aftermaths of night forests, local roads.

In Indio, in a café where no music played, he chewed the burrito as if afraid it might escape. His shoulder blades were thin moons.

What could I say to draw him to me, or me to him? Most of the time words don’t mean a thing. They twist mean and not much to do with the truth.

PRAISE FOR THIS WICKED TONGUE

“It’s been a long wait for fans of Elise Levine’s delicious short stories. But the wait was well worth it...[This Wicked Tongue] delivers in spades. From the get-go, Levine demonstrates a boisterous command of language and an ability to seize the reader’s attention...her stories pry us open, revealing our secretly wounded places, finally acting as balm and salvation. Lucky us.” —Toronto Star

“Sit back and let the language, distilled to its most pristine, wash over you with the force and effect of poetry.” —Hamilton Review of Books

“Levine offers a vision and a language so poetically visceral and fiercely poignant—so uniquely intelligent—that story after story I was in awe of her courage and artistry.” —Barbara Gowdy

“Elise Levine writes with a new and exciting type of lyric rhythm. These are stories with the beating heart of poems.” —Rion Amilcar Scott, winner of the 2017 PEN/Robert W. Bingham Prize for Debut Fiction

“Each story in This Wicked Tongue is powerful and vivid and packed with an emotional punch to the heart.” —Quill & Quire (starred review)

“Elise Levine uses language like a scalpel to cut to the nervy core of our inner life. There’s a restless desolation in these stories, perfectly poised against a wily, wry wit. This Wicked Tongue is wicked smart.” —Dawn Raffel, The Strange Case of Dr. Couney

“Levine shines, furnishing a mental space with language that juggles colloquial and classical vocabulary, complete with verbs that feel freshly minted. In other hands, such an inward turn might give rise to feelings of claustrophobia, but here one has the sense of a widening.” —Literary Review of Canada

“Reading Elise Levine is akin to a wild ride down a dark road at night...Bold and startling...Precipitous and exhilarating.” —Globe and Mail

“As immersive, hyper-vivid and true as fiction ever gets.” —Lisa Moore

“A dazzling wordsmith, a lexical tease, Levine is like a kid let loose in a leaf pile, kicking up words for the sheer joy of watching them spin.” —Toronto Star

“Audacious…There’s hardly a word in [these stories] that doesn’t weigh heavily, or doesn’t have a bristling edge to it.” —Toronto Star

“Levine’s vivid language and unflinching exploration of people living on the edge of society will stay with you long after each story is read … Levine is unafraid to experiment with language, voice, and form. Her explorations of humanity and the adventurous spirit of her work will keep the reader hooked, hesitating to turn the page but unable to resist the pull of her prose.” —St. John’s Evening Telegram

“Taut and direct, Elise Levine’s writing compresses the distance between art and audience, drawing a reader experientially through her fiction. Levine is a visceral imagist. Her fiction renders event indistinguishable from emotion, affecting the gut as fully as the mind.” —Ottawa Citizen

“Levine uses raw, hallucinatory prose to tell this curious story of a woman becoming undone…The novel’s visceral wordplay, rough sexuality, and anguished depiction of survivor’s guilt are bound to captivate its audience. A transgressive, gut-wrenching portrayal of grief that asks what it’s like to drown.” —Kirkus Reviews

"Levine’s spare language works brilliantly to capture both the vastness of the open water and the claustrophobic chaos of underwater caverns [as well as] a heightened, stylized canvas for Marilyn’s addictive nature...The result is a tale of self-destruction and hubris...absolutely gripping.” —Numero Cinq

“A vibrant mixture of intimate moments...Blue Field is an exploration of two selves coming together with the sea. Levine’s aquatic language is gorgeous, displaying her literary prowess.” —THIS Magazine

“No reader can make his or her way through these stories and retain any kind of complacency.” —Calgary Herald

“Reading the novel is a sensation akin to drifting weightlessly beneath the surface of the text...dazzling, textured, tightly woven.” —Music and Literature

“Levine exposes the roughness and the crude pain of life. It’s a rare writer who can write bluntly about the raw side of life while subtly leaving room for her readers to make their own, often disturbing connections.” —Books in Canada

Other titles by Elise Levine

The Short Story Has No Limits

For Short Story Month, we show that there is a collection for every kind of reader with these twelve amazing titles.