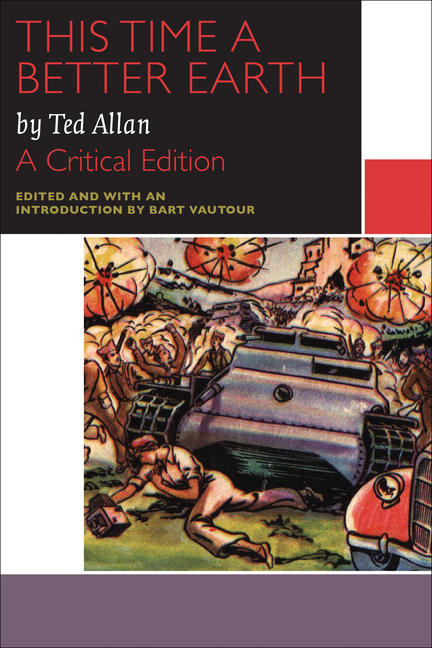 A young Canadian marches over the Pyrenees and enters into history by joining the International Brigades—men and women from around the world who volunteered to fight against fascism in the Spanish Civil War. This new edition of Ted Allan’s novel, This Time a Better Earth, reintroduces readers to the electrifying milieu of the Spanish Civil War and Madrid, which for a short time in the 1930s became the epicentre of a global struggle between democracy and fascism. This Time a Better Earth, first published in 1939, tells the story of Canadian Bob Curtis from the time of his arrival in Spain and the idealism and trials of the international volunteers. Allan’s novel achieves the distinction of being both a work of considerable literary and historical significance and a real page-turner.

This is the first installment of a series of titles to be published in the Canadian Literature Collection under the Canada and the Spanish Civil War banner. This is a large-scale project devoted to the recovery and presentation of Canadian cultural production about the Spanish Civil War (spanishcivilwar.ca), directed by Bart Vautour and Emily Robins Sharpe.

Alan Herman in Montréal. A dedicated Young Communist, he was a correspondent for the Toronto Daily Worker and The Clarion, and it was then that he adopted the name Ted Allan to infiltrate a fascist organization and write an exposé. He served in the International Brigade in the Spanish Civil War, of which This Time a Better Earth is a fictionalized account. His later novel Love Is a Long Shot (1984), which won the Stephen Leacock Award, is a humorous and autobiographical portrait of a teenage socialist. Ted Allan’s best-known book is The Scalpel, the Sword: The Story of Doctor Norman Bethune (1952), written in collaboration with Sydney Gordon and later adapted for the screen.

Bart Vautour is Assistant Professor of English at Dalhousie University. He is a scholar of Canadian literature, with a particular interest in the interplay between the history of transnational Canadian cultural production and its contemporary publics. He is co-editor, with Erin Wunker, Travis V. Mason, and Christl Verduyn, of Public Poetics: Critical Issues in Canadian Poetry and Poetics. His is currently completing a monograph project, The Deed Becomes the Word: Canadian Media and Writing on the Spanish Civil War.

Other titles by Ted Allan

The Scalpel, the Sword

The Story of Doctor Norman Bethune

Other titles by Bart Vautour

The Truth About Facts

Meet Me on the Barricades