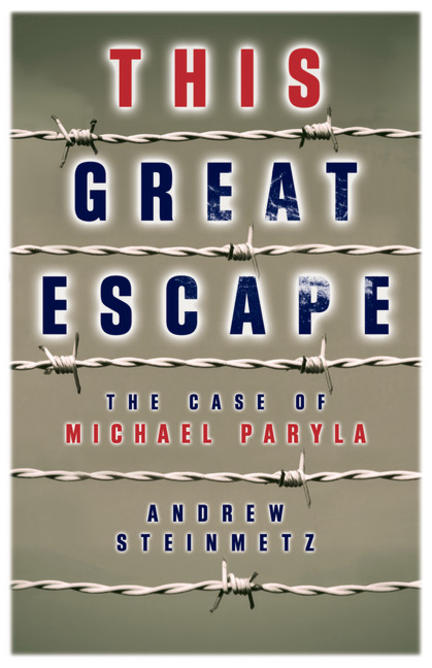 He had fifty-seven seconds of screen time in the most lavish POW film Hollywood ever produced. He was blond. A Gestapo agent. Sauntering down the aisles of a speeding train, he speaks in terse German to Richard Attenborough, Gordon Jackson, David McCallum. The film is The Great Escape (by John Sturges, starring Steve McQueen); the actor, though uncredited, is Michael Paryla. He was part Jewish. Shortly after filming he died.

In This Great Escape, Andrew Steinmetz tenderly reconstructs the life of a man seen by millions yet recognized by no one, whose history-from childhood flight from Nazism to suspicious death twenty years later-intersects bitterly, ironically, and often movingly with the plot of Sturges's great war film. Splicing together documentary materials with correspondence, diary entries, and Steinmetz's own travel journal, This Great Escape does more than reconstruct the making of a cinema classic: it is a poignant and moving testament to the complexity of human experience, a portrait of a family for whom acting was a matter of survival, and proof that our most anonymous, uncredited, and undocumented moments can brush against the zeitgeist of world history

Praise for This Great Escape

"[A] touching biography...Paryla was never a household name and may not seem worthy of attention, but the founding editor of Esplanade Books succeeds in making the case that anyone's biography can provide insight into the context in which he or she existed. Paryla's too-short life was defined by Europe during World War II and after, and through his life, those periods are themselves defined."-Publishers Weekly

"Fascinating reading...elliptical and often intense...This book will appeal to readers who have seen The Great Escape, are interested in film history and/or acting, or have an interestin World War II and its effects on survivors."-Library Journal

"Idiosyncratic and moving...In This Great Escape, Andrew Steinmetz mixes memoir, scholarship, movie trivia, and one crazy-ass obsession to create a genre-bending triumph." - Joel Yanofsky, author of Mordecai and Me

"Andrew Steinmetz is a devoted detective, whose beat in This Great Escape is a great and treacherous one: human memory. Following clues literary, cinematic, medical, and theatrical, he wanders the continents, turning one man's bit part in a great Hollywood movie into an absorbing meditation on the intersection of life, art, and history."-Taras Grescoe, author of Straphanger

"[Steinmetz's] writing is fresh and alive."- The National Post/Montreal Gazette

"[Steinmetz's] observations are sharp, sympathetic and oddly comforting, and he knows his way around a metaphor."- Toronto Sun

"Charged with emotional freight, Steinmetz delivers. Steinmetz is heroically attempting what so few of his contemporaries dare."- Literary Review of Canada

"Waggishly eccentric and sometimes quite moving."- Montreal Review of Books

Andrew Steinmetz is the author of a memoir, Wardlife: The Apprenticeship of a Young Writer as a Hospital Clerk and two collections of poetry, Histories and Hurt Thyself. Steinmetz’s work has been shortlisted for the Edna Staebler Award, the Quebec Writers Federation (QWF) First Book Award, the Mavis Gallant Prize for non-fiction, and the A.M. Klein Prize for Poetry. Presently Steinmetz is the editor of Esplanade Books, the fiction imprint at VÃ©hicule Press. He lives in Ottawa.

"[A] touching biography...Paryla was never a household name and may not seem worthy of attention, but the founding editor of Esplanade Books succeeds in making the case that anyone's biography can provide insight into the context in which he or she existed. Paryla's too-short life was defined by Europe during World War II and after, and through his life, those periods are themselves defined." - Publisher's Weekly

"Fascinating reading...elliptical and often intense... This book willappeal to readers who have seen The Great Escape, are interested in film history and/or acting, or have an interest in World War II and its effects on survivors." - Library Journal

"The stated purpose of Andrew Steinmetz's 'This Great Escape' is simple-to profile the actor Michael Paryla, a distant relative of the author, whose crowning glory (just before his sudden and possibly accidental death from an overdose in Hamburg) was an uncredited 57second appearance in the iconic WWII movie 'TheGreat Escape'. But under Steinmetz's obsessive, poetic gaze, the focus gradually expands to capture both writer and reader in the frame. In this innovative and unexpectedly funny book, no one, not even the most insignificant bit player, makes a clean escape. - Jury Citation, Hilary Weston Prize

"With extraordinary emotional intensity, Steinmetz reclaims this son, friend, actor, cousin, for us all. His close-up of an almost-famous man challenges easy assumptionsabout who deserves a biography — beguiling." - Toronto Star

"Seeing connections between Paryla's life and art at every turn, Steinmetz pursues his ill-fated cousin's faint and rapidly vanishing trail. The result is a kind of detective story, but one where the sleuthing being done is as psychological as literal...it succeeds completely." - The Montreal Gazette

"[An] idiosyncratic mix of travelogue, family memoir, and elliptical musing ... pithy ... The loving tribute that Steinmetz offers [Paryla] is that he now lives on, not merely in his fleeting scene in a Hollywood movie, but in his cousin's nimble, evocative prose." - The Brooklyn Rail

Other titles by Andrew Steinmetz

The apprenticeship of a young writer as a hospital clerk

Outsider Books: This Is a Party I Would Go To

The author of new novel Skin House on other books featuring outsider perspectives.

Want to know more about the books and authors making waves this season? Just dive in to this great selection from 49th Shelf's archives.