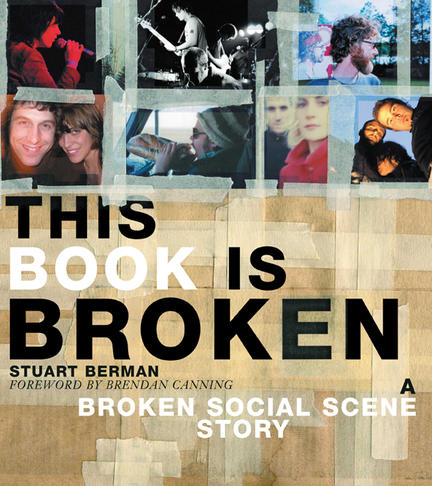 The year was 2000. The alternative music scene had all but died, and pre-packaged pop stars had filled the vacuum. But in a basement apartment in the heart of downtown Toronto, two musicians were forming a creative partnership that would revive the mass appeal of indie music and forever change how we think of a band.

In this biography of the ever-evolving indie-rock collective, Broken Social Scene, music columnist Stuart Berman tracks the group's inception by Kevin Drew and Brendan Canning; groundbreaking performances at Ted's Wrecking Yard that raised the band's local status to mythical proportions; Broken Social Scene's meteoric rise upon the release of breakout album You Forgot It In People; the creation of Arts & Crafts records with music-biz maverick Jeffrey Remedios; and life on the road with revolving bandmates, including members of Stars, Metric, The Dears, and international pop sensation Feist.

Stuart Berman has drawn from hours of interviews with members and affiliates of Broken Social Scene, and exclusive, never-before-seen photographs, gig posters, and artwork to create a spectacular oral and visual history of this ever-evolving indie-rock collective.

Stuart Berman is an editor at Eye Weekly, and has been writing about the Toronto music scene for ten years. His writing on music and pop culture has appeared in PitchforkMedia.com, Magnet, The Village Voice, Toro, Azure, the Toronto Star, and the National Post. He lives in Toronto.

Brendan Canning is a prolific songwriter and founding member of the indie rock collective Broken Social Scene. He is a veteran performer on the Canadian music scene and formerly a member of such notable bands as By Divine Right and hHead.

Kevin Drew, a Toronto musician and songwriter, is a founding member of the indie rock collective Broken Social Scene. He is formerly a member of the band KC Accidental, and also released a solo album, "Spirit If . . ." in 2007.

A Fantastical account of a powerful music movement in Canadian indie rock.

It's more then just the story of a rag-tag rock group - it's also a valentine to a burgeoning music scene.

It's an endlessly interesting story, an original one amid the usual rock-bio cliches, and told here in an honest, inventive and consistently engaging way.

Going through the book while listening to the music is a required joy...Moreover, the book details the creation of a great local music scene, with several bands building audiences that extended to international recognition...This Book Is Broken will certainly appeal to fans. In reality, anyone with a fascination with how ideas are exchanged, extracted, and then made into vibrant and viable art should find this of interest.

[Stuart Berman's] thoughtful, energetic, and playful retelling of the band's history...shows us the band in a broader cultural context.

Other titles by Stuart Berman