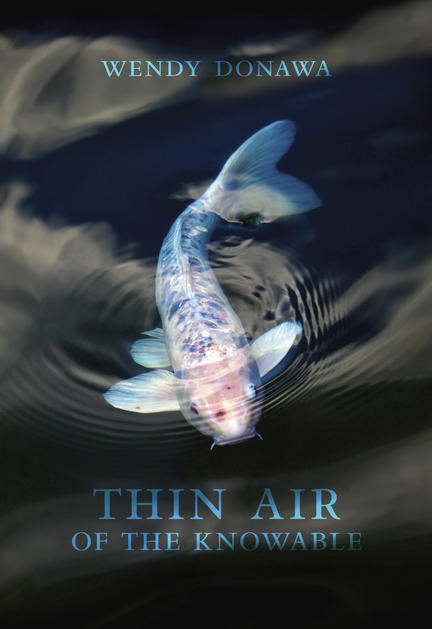 An elegiac and incisive debut that blends poems of social justice with poems of ordinary life.

In her first collection, Thin Air of the Knowable, the physical landscapes of Wendy Donawa’s life—West Coast, Caribbean, prairies—ground many of her poems and often reflect the inner geography of her preoccupations. A road-trip poem moves from prairie winter, “an icy scatter of gravel / the moving centre of this unpeopled world,” past a cattle liner on its way to the slaughter house, but it also passes beneath the sky’s “blazing scroll of light,” and magpies “flashing black and teal in the sun.” Landscape also functions metaphorically to suggest how historical settings play out in the exigencies of individual lives.

Other preoccupations include poems that reflect on poesis itself—the strange poem-making compulsion to capture that which is largely inexpressible (hence “the thin air of the knowable”), and the role of dreams, memory, and intuition in shaping a poem’s knowledge.

Donawa is, in many ways, a political poet, yet manages to put flesh and blood into everything she writes. In the end,

Perhaps there is only the demonic journey.
Small beauties by the roadside, and
such love as we can muster.
(from “Pu Ru Paints Zhong Kui the Demon Queller on a Mule”)

Praise for Thin Air of the Knowable:

“Like the watchmakers of old, Wendy Donawa puts a spyglass to her eye and fixes her vision to the minute, to all that carries on beneath our imperfect sight—worlds upon worlds brought into the sharpest focus.” —Pamela Porter

Wendy Donawa, formerly a museum curator and academic in Barbados, now lives on the West Coast and participates in Victoria's vibrant poetry scene. Her poems have appeared in anthologies, magazines, and online publications across Canada. She was a finalist in The Malahat Review's 2013 Open Season Competition, and in 2015 she was runner-up in the inaugural Cedric Literary Awards. She has published two chapbooks, Sliding Towards Equinox (Rubicon Press, 2009) and Those Astonishments of Sorrow, of Joy (Leaf Press, 2012). Thin Air of the Knowable is her first collection.

Other titles by Wendy Donawa