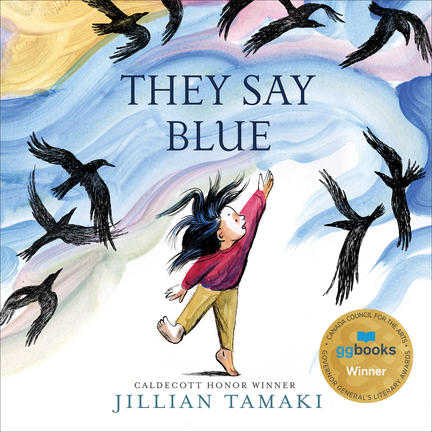 Caldecott and Printz Honor-winning illustrator Jillian Tamaki brings us a poetic exploration of colour and nature from a young child’s point of view. They Say Blue follows a young girl as she contemplates colours in the known and the unknown, in the immediate world and the world beyond what she can see. The sea looks blue, yet water cupped in her hands is as clear as glass. Is a blue whale blue? She doesn’t know — she hasn’t seen one.

Stunningly beautiful illustrations flow from one spread to the next, as time passes and the imagination takes hold. The world is full of colour, and mystery too, in this first children's book from a highly acclaimed artist.

CCSS.ELA-LITERACY.RL.K.7
With prompting and support, describe the relationship between illustrations and the story in which they appear (e.g., what moment in a story an illustration depicts).

CCSS.ELA-LITERACY.RL.1.4
Identify words and phrases in stories or poems that suggest feelings or appeal to the senses.

CCSS.ELA-LITERACY.RL.1.6
Identify who is telling the story at various points in a text.

CCSS.ELA-LITERACY.RL.3.7
Explain how specific aspects of a text's illustrations contribute to what is conveyed by the words in a story (e.g., create mood, emphasize aspects of a character or setting)

Jillian Tamaki is a cartoonist and illustrator living in Toronto, Ontario. Her books include Skim and This One Summer, both co-created with her cousin Mariko Tamaki; and Super Mutant Magic Academy and Boundless. She has contributed illustrations to some of the world's top publications, including the New York Times, the New Yorker and the Guardian, and has taught at Parsons and the School of Visual Arts in New York City.

Attuned to a child’s psychology and patterns of critical thinking, this visually stunning work is a must-purchase for libraries.

If They Say Blue is ‘about’ anything, it’s a peek into a child’s curious, questing, observant mind as she moves beyond received wisdom — what is it ‘they’ say again? — to thinking and feeling and yearning for herself.

The illustrations also clearly communicate the wide emotional landscape experienced by young children . . .The language is lyrical and soothingly . . . a wonderful book to use when investigating colour and seasons and the bigger world around us as well as exploring the emergence of critical thinking in children.

Readers experience the colors and sensations of the world through the varying moods and observations of one little girl. . . .this is a reminder to slow down, savor the present, notice small details, and relish childlike wonder.

Thinking, imagining, noticing — these, Tamaki suggests, are the tools we have to understand our world.

With her first picture book, Jillian Tamaki displays a mastery of the form along with a sensitive understanding of the imaginative life of a small child.

Other titles by Jillian Tamaki

Discover which books were inspired by history, by questions, by rap lyrics, by beach glass, true crime podcasts, and more!

Not just for kids anymore. Readers of all ages will appreciate this selection of some of the most wonderful picture books of the year.