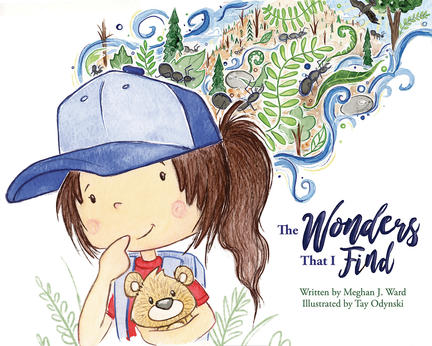 Vibrant, whimsical illustrations accompany this thoughtful poem, which will quickly become a favourite for both parents and children to read together.

It's a beautiful summer day and Geneva's parents have something special in mind: a hike to a scenic viewpoint in the mountains. So, they load up their car and drive to their chosen trail — a steep but rewarding hike called "Climb into the Sky." With her teddy in tow, Geneva tries to keep up with her parents, who are eager to show her the view up high. A bird's-eye view is what they promise, one that shows a winding river and trees down low, and rows of peaks that stretch into the distance. But, as she walks, she's distracted by the wonders of nature that catch her eye and beckon her to take a closer look. What does she see along the trail that's so fascinating? Does she ever reach the top?

The Wonders That I Find taps into a child's curiosity about the world — something we all possess but often neglect as we grow older. The book asks us to slow down as we join Geneva on the trail, to appreciate the smaller things and savour the journey as much as the destination.

Meghan J. Ward is an outdoor, travel, and adventure writer. She is also the co-founder and a former editor-in-chief of the mountain culture publishing house Crowfoot Media, and the creative force behind the Canadian Rockies Annual. An avid adventurer with a voracious appetite to understand her surroundings, Meghan has established herself over the past decade as a mountain historian and an authoritative voice in the Rockies outdoor and travel scene. Her work has taken her from authoring books to writing for films, anthologies, blogs, and some of North America’s top outdoor, fitness, and adventure publications. She lives in Banff, Alberta, with her husband, Paul Zizka, and their two daughters.

Taylor “Tay” Odynski is a full-time freelance artist and illustrator. A graduate of the Bachelor of Design program at Alberta College of Art and Design (now Alberta University of the Arts), Tay works in styles that are both distinct and diverse. In addition to her commissioned paintings, sought after by collectors around the world, Tay has provided artwork for multiple album covers of Canadian recording artists; window painting for special events; and a full mural in the Calgary Children’s Cottage. A regular competitor in live painting events, Tay also hosts paint nights as well as live-streaming regularly on her popular Instagram feed (@taytayski). When she’s not throwing paint at a canvas, Tay is a competitive ringette player and an avid snowboarder. She lives in Calgary, Alberta.

Other titles by Meghan J. Ward

Lights to Guide Me Home

A Journey Off the Beaten Track in Life, Love, Adventure, and Parenting

Souvenir of the Canadian Rockies

Splendour of the Canadian Rockies

Beauty of the Canadian Rockies

Grandeur of the Canadian Rockies