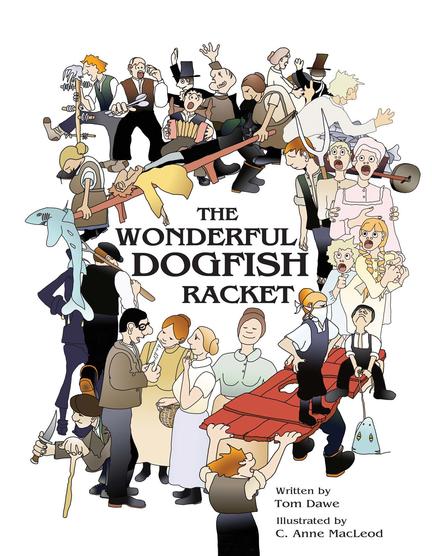 It was a normal summer for one small fishing village in Newfoundland . . . until the dogfish arrived!

Tom Dawe has taken a unique piece of history and crafted it into an entertaining tall tale. His whimsical text is perfectly complemented by C. Anne MacLeod's distinctive folk art.

Tom Dawe has been a high-school teacher, English professor, visual artist, editor, writer, and poet. He has published seventeen volumes of work, which include poetry, folklore, and children’s literature. His latest works include Where Genesis Begins (Breakwater, 2009), winner of the Canadian Authors Association Poetry Award, and Moocher in the Lun (Flanker Press, 2010), winner of the 2010 Newfoundland and Labrador Book Awards–Bruneau Family Children’s/Young Adult Literature Award.In the 1970s, during the “Newfoundland Renaissance,” he was one of the founders of Breakwater Books, a founding editor of TickleAce, and prose editor of the Livyere, a folklore journal. In 2002, Martina Seifert’s comprehensive study, Rewriting Newfoundland Mythology: The Works of Tom Dawe, was published in Germany and in Cambridge, MA.Tom Dawe is the recipient of many awards and honours. In 2007, he was awarded a lifetime membership for the Writers’ Alliance of Newfoundland and Labrador and was elected to the Newfoundland and Labrador Arts Council Hall of Honour. In 2010, he was named St. John’s Poet Laureate. In 2012, he was named a member to the Order of Canada and also to the Order of Newfoundland and Labrador.

C. Anne MacLeod is a film and video animator, a graphic artist, and an illustrator. Originally from the Isle of Man, Anne and her husband, Paul, have lived in Newfoundland since 1968. They have one grown son, Jonathan, and three grandchildren.Anne has conducted many art and animation workshops in elementary schools in the province and led an innovative children’s animation activity in a development project in Thailand. She has also worked and conducted training in Malaysia and Brazil.Anne is the illustrator of The Clothes Lion stories, Winter of the Black Weasel, Free Flight, and Moocher in the Lun, and she has designed numerous educational books and training materials. Currently she is working on her animated film Sea Urchin. In 2013, Anne was delighted to have her “whaler” logo design chosen to represent the new UNESCO World Heritage Site of Red Bay, Labrador.

Other titles by Tom Dawe

Moocher in the Lun

A Newfoundland and Labrador Folk Alphabet

Other titles by C. Anne MacLeod

Moocher in the Lun

A Newfoundland and Labrador Folk Alphabet