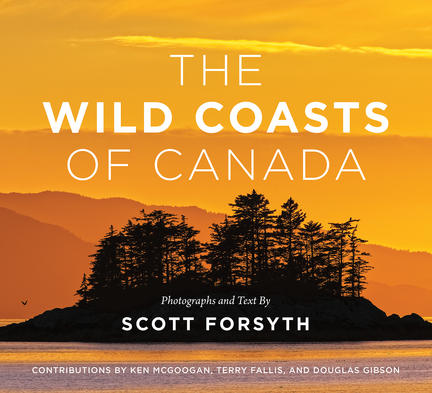 An astounding collection of photographs and essays celebrating the grandeur of Canada’s most remote regions located along the three ocean coastlines.

Divided into three main sections--the Atlantic (Newfoundland and Labrador), the Arctic (Nunavut and The Northwest Passage), and the Pacific (Haida Gwaii and The Great Bear Rainforest)--the book will highlight features of geographical and cultural significance using glorious full-colour photographs and personal reflections. These stunning photographs and warm-hearted stories will inspire the reader to embark on their own journey to explore places still unfamiliar to them in this vast and magnificent landscape of Canada.

Scott Forsyth is an award-winning professional photographer specializing in the Canadian landscape. As staff photographer and expedition team member for Adventure Canada and Maple Leaf Adventures, Scott journeys to many of Canada’s remote coastal regions annually. His lifelong mission to continue exploring the fabric of the Canadian landscape and its inhabitants, and sharing this with the public, has earned him a fellowship in both The Royal Canadian Geographical Society (Ottawa), and the The Explorers Club (New York City). He has twice earned the distinction of Photographic Artist of the Year – Alberta, from the Professional Photographers of Canada, and holds the designation of Master Photographer from Master Photographers International. His photographs have been published on the cover of Canadian Geographic Magazine and featured in several Canadian Geographic calendars, and numerous magazines and books. Scott’s photography can be viewed at scottforsyth.ca. He lives in Calgary, Alberta.

"Chapter introductions and detailed captions provide readers with a fabulous tour of the Pacific, Arctic, and Atlantic coasts and the people who call these regions home."

"Opening this book is like stepping into a prestigious gallery. With each image we sink deeper into coastal culture, climate and community. The added attention to text makes the storytelling even richer. This book provides the reader with a lasting visual and literary impact." — Helen Rolfe, 2020 Book Competition Jury