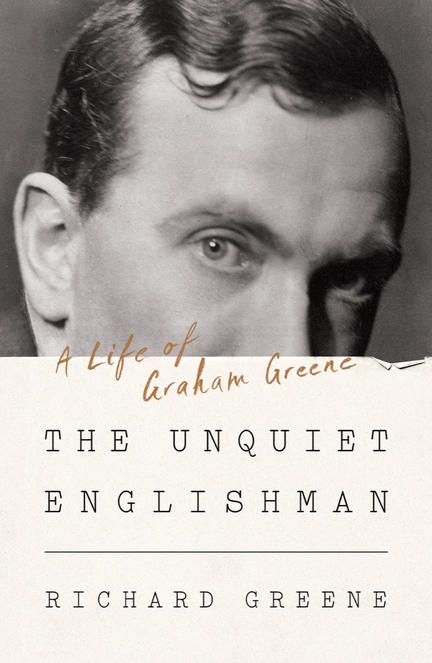 A vivid, deeply researched account of the tumultuous life of one of the twentieth century’s greatest novelists, the author of The End of the Affair.

One of the most celebrated British writers of his generation, Graham Greene’s own story was as strange and compelling as those he told of Pinkie the Mobster, Harry Lime, or the Whisky Priest. A journalist and MI6 officer, Greene sought out the inner narratives of war and politics across the world; he witnessed the Second World War, the Vietnam War, the Mau Mau Rebellion, the rise of Fidel Castro, and the guerrilla wars of Central America. His classic novels, including The Heart of the Matter and The Quiet American, are only pieces of a career that reads like a primer on the twentieth century itself.

The Unquiet Englishman braids the narratives of Greene’s extraordinary life. It portrays a man who was traumatized as an adolescent and later suffered a mental illness that brought him to the point of suicide on several occasions; it tells the story of a restless traveler and unfailing advocate for human rights exploring troubled places around the world, a man who struggled to believe in God and yet found himself described as a great Catholic writer; it reveals a private life in which love almost always ended in ruin, alongside a larger story of politicians, battlefields, and spies. Above all, The Unquiet Englishman shows us a brilliant novelist mastering his craft.

A work of wit, insight, and compassion, this new biography of Graham Greene, the first undertaken in a generation, responds to the many thousands of pages of letters that have recently come to light and to new memoirs by those who knew him best. It deals sensitively with questions of private life, sex, and mental illness, and sheds new light on one of the foremost modern writers.

Richard Greeneteaches Creative Writing and British Literature at the University of Toronto. His most recent biography Edith Sitwell: Avant-garde Poet, English Genius (2011) was widely acclaimed, and he has published three collections of poetry, including Boxing the Compass (2010), which won the Governer General's Award for Poetry. He lives in Cobourg, Ontario.

Authoritative and thoroughly researched, while being superbly readable... [The Unquiet Englishman] should long serve as the standard biography [of Graham Greene]. —Dan Cryer, Boston Globe

[Richard Greene] displays an authoritative grasp of his subject. In a brisk and transparent style, he covers every chapter of Graham Greens' tumultuous life.—Mary Ann Gwinn, Minneapolis Star Tribune

Thank goodness for Richard Greene, whose splendid one-volume biography…conjures [Graham Greene] in all his perplexing variety…Cogently argued and happily free of jargon, [The Unquiet Englishman] offers a long-needed antidote to ‘dirty linen’ biographers who have sought to expose a darker shade of Greene and, in consequence, lost sight of the books. At last Graham Greene has the biographer he deserves. —Ian Thomson, Evening Standard

Cause for celebration…[Richard Greene] gives us a nicely written and well-judged cradle-to-grave portrait that needed to be conventional and unshowy, and is all the better for it…[He] has mastered a tremendous amount of material.—Nicholas Shakespeare, Spectator

[Richard Greene] writes briskly and engagingly, with a wry wit and an endearing fondness for trivia and puns…[Graham] Greene emerges from these pages in three dimensions, as a uniquely fascinating man…We badly needed a sympathetic but clearheaded life of Greene, and this book fills the gap admirably.—Jake Kerridge, Sunday Telegraph

Insightful... Though the narrative never loses its focus on Greene as an artist, readers will learn much about the daunting ideological barriers that Greene pushed through to craft his art... A complete portrait of a many-faceted titan.—Booklist (starred review)

Greene's life story is both interesting and fascinating, and this balanced account offers the best reading of how his personal life infused and enriched his work.—Library Journal (starred review)

Vivid…it’s awe-inspiring that Greene fit so much into a single life, and it’s no small feat that his latest biographer has so skillfully captured that life in a single work.—Publishers Weekly

Other titles by Richard Greene

A Life in Letters

The Works of Mary Leapor