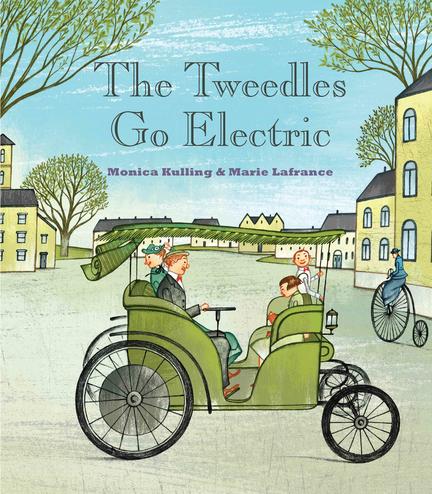 Meet the Tweedles: Papa, Mama, daughter Frances and her brother, Francis. It’s the dawn of a new century—the twentieth century! — and the Tweedles have decided to buy a car. But no gas guzzler for this modern family. Only an electric car will do for them.

Frances is the only member of her eccentric family who is not delighted when Papa decides they need an electric car. She would rather read a book. Frances knows that cars go fast, which can only lead to trouble. She is even less impressed when the family takes possession of the car and faces ridicule from more conventional citizens with their noisy, dirty, gas-fueled machines. But when Mr. Hamm is unable to get to the hospital because his car has run out of gas, Frances saves the day — and falls in love with automobile travel at the same time.

With humorous allusions to the twenty-first century — which is better? Gas or electric? — The Tweedles Go Electric is a charming picture book about an odd and endearing family and their attempts to keep up with the times.

Monica Kulling is the author of over forty books for children, including the popular Great Idea series, stories of inventors. The third book in the series, In the Bag! Margaret Knight Wraps It Up, was nominated for the 2012 Governor General’s Award for illustration and chosen as the 2012 Simon Wiesenthal Honor Book. In addition, Monica’s work has been nominated for numerous Silver Birch Express and Golden Oak awards. Her recent picture books include Lumpito and the Painter from Spain and Mister Dash and the Cupcake Calamity. Monica Kulling lives in Toronto, Canada. Visit her at www.monicakulling.com.

Marie Lafrance is a French Canadian illustrator of many books including Une poule pour Izzy Pippik and Bunny, cheval de guerre. Her work has been nominated twice for a Governor General's award. Marie now primarily works on picture books, using her warm and gently humorous illustrations to delight and entertain children of all ages. She lives in Montreal.

Even the youngest reader (or listener) is bound to get the tongue-in-cheek humour.

[A] charming story about the early twentieth century advent of a technology that would change the world.

The Tweedles Go Electric is an entertaining and engaging trip to the past that will fuel young readers’ thoughts on eco-transportation today.

This charming portrayal of the eccentric, unselfconscious Tweedles winks at its audience through both its sly text and playful pictures, where Lafrance’s graphite and mixed-media drawings in a fitting palette of greens and yellows capture the family’s quaint but rapidly expanding world.

Kulling . . . uses a deadpan narrative to playfully allude to 21st-century 'green' technology while introducing an idiosyncratic family that would be right at home in a Wes Anderson movie.

A fine joke, well-delivered, and as clever as it is timely.

[F]illed with playful language, quirky humor, and contemporary allusions. . . . The graphite-on-paper and mixed-media-collage illustrations are dynamic and engaging and provide a fun look at life at the turn of the 20th century.

Other titles by Monica Kulling

How Sara Josephine Baker Saved the Lives of America's Children

To the Rescue! Garrett Morgan Underground

Other titles by Marie Lafrance

We Are All Ears!