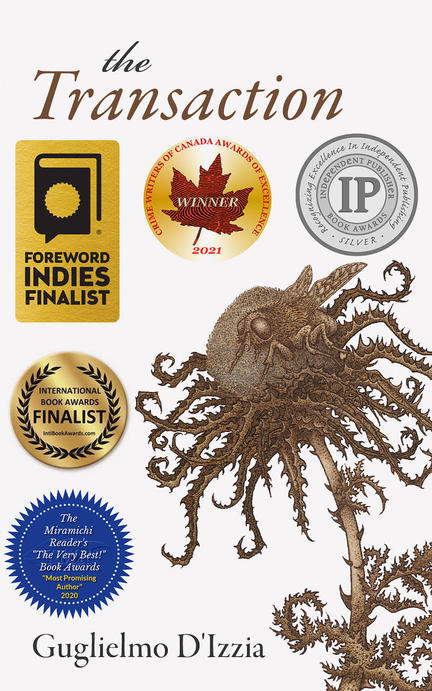 A property harbouring a gruesome secret goes up for sale. Two men —perhaps, the wrong men —are shot in plain daylight. Nothing is what it seems. And matters do not turn out as anticipated. De Angelis, an inscrutable northerner, is travelling to a small town perched somewhere in Sicily's hinterland to negotiate a real estate transaction, only to find himself embroiled in a criminal conspiracy. While en route, the train he's on mysteriously breaks down, forcing him to spend the night in a squalid whistle stop. What follows is a web of unsettling events, involving child prostitution and brazen killings, that lead to the abrupt demise of his business deal. But De Angelis is undeterred and intent on discovering what went wrong with his transaction. As he embarks on a reckless sleuthing, an unexpected turn of events sends him into a tailspin. At the heart of it is an alluring blue-eyed girl, Marinella. The chance encounter with the eleven-year-old traps him in a psychological and moral cul-de-sac, leaving him no choice but to confront the type of man he really is.

...even though I'm well aware it's impossible for her to see my face where I'm standing, at least not fully, she seems to be staring right at me. Feeling faint, I lean against the wall. I close my eyes to stop the room and the distorted faces of the mourners from swirling. Droplets of cold sweat stream down my temples. I reach for the handkerchief in my right pocket and zigzag it across my face.

The parallels between The Transaction and our historic moment are stunning, ... D’Izzia writes like a rolling video camera whose lens lingers lovingly on miscreants, degenerates and grotesqueries of all descriptions ... you will almost certainly see this story on the screen, be it large or small. It has great potential as a sophisticated masterpiece of physical and psychological horror.

The Transaction is a smart book. One that knows exactly what it is and what it’s trying to say ... It’s a cerebral pleasure more than it is a visceral one ... I liked it because it explored the idea of the disappearance of the self, which I’m really interested in, and it does it in a subtle way [that] doesn’t call too much attention to itself.

As a novelist, Guglielmo D’Izzia is a master of a noir tinged narrative storytelling style for The Transaction that readers will find inherently fascinating and totally engaging ... unreservedly recommended ...

If it is true that works of art last for generations because of their ambiguities, The Transaction should last for centuries. I was left with the sensation of what happened? and that’s not a bad thing in literature. I sensed engagement with something beyond the narrator’s minutely detailed descriptions as if it might be a dream. I kept reading. Guglielmo D’Izzia is a skilled, disciplined artist refusing to give the reader clarity of meaning and motivation. He makes us interpret, and we readers of great literature value our own involvement in a piece. Something intriguing is going on here, and few of us will see it in the same way. I can just imagine the discussions around seminar tables. We learn more from what is not said, than from what is. And I say, bravo!

The lightness of those steps paired with the darkness of the conversation shows D'Izzia's capacity for black humour at its finest. Under the brutal brightness of D’Izzia’s Sicilian sun, we’re forced to confront the most uncomfortable and grotesque taboos. What’s more, we, like De Angelis, are forced to confront our complicity in their continued existence.

It cannot be easy to write humorous fiction, although it does seem to come naturally to some. In the television world, they have writing teams, but in the sequestered world of the writer, it’s all on them to produce a work that is not only funny but interesting as well, that tells a story. The Transaction is such a story and from all appearances, Mr. D’Izzia appears to have the delicate mix of humour and earnest literature in fine control in this, his debut novel from Guernica Editions.

Mysterious, stark and cinematic, Guglielmo D’Izzia’s debut novel The Transaction takes the reader on an array of escalating and disturbing encounters. Perception is everything in the Sicilian town of Figallia where an out-of-town businessman from ‘the north’ becomes immersed in small-town life and its history of menace. Rife with dark undercurrents like a Giorgio de Chirico painting, the surface is not what it seems. Eerily detailed and atmospheric, this tightly controlled narrative brims with tension.

The novel reads like an instant classic, at first conjuring Hemingway’s simple, modern prose, but then revealing something sinister and surreal that would be more at home in Kafka’s wild imagination.

D’Izzia has a pristine voice for the off-kilter while grounded in European Modernism. A love song to Kafkalike absurdism reminiscent of a Sicilian Camus. The prose, the sweltering heat, each minor character who brushes against De Angelis’ fumbling is executed to perfection ... [It] takes a talented novelist to produce something with such texture and reality. ... The Transaction is a masterful work of realism, absurdist rationale, and discomfort …

Despite De Angelis' amorality, the fact that he compulsively keeps after his goal even after encountering impediment after impediment, makes him an evocative character... unreliable narrators make for a more intriguing read and this one had me paying equal attention to clues and red herrings, and in the end it was up to me to choose what to believe.