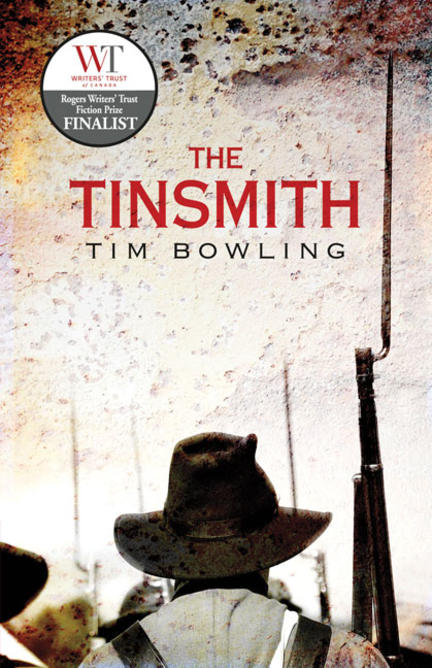 During the bloodiest single-day battle in American history, Anson Baird, a surgeon for the Union Army, is on the front line tending to the wounded. As the number of casualties rises, a mysterious soldier named John comes to Anson's aid. Deeply affected by the man's selfless actions, Anson soon realizes that John is no ordinary soldier, and that he harbors a dangerous secret. In the bizarre aftermath of the Battle of Antietam, this secret forges an intense bond between the two men.

Twenty years later on the other side of the continent, Anson discovers his old comrade-in-arms is mysteriously absent, an apparent victim of the questionable business ethics of the pioneer salmon canners. Haunted by the violence of his past, and disillusioned with his present, Anson is compelled to discover the fate of his missing friend, a fate inextricably linked to his own.

"Altogether, a story of impressive scope, and bristling with action." —Jack Matthews, author of The Gambler's Nephew

Tim Bowling has published numerous poetry collections, including Low Water Slack; Dying Scarlet (winner of the 1998 Stephan G. Stephansson Award for poetry); Darkness and Silence (winner of the Canadian Authors Association Award for Poetry); The Witness Ghost; and The Memory Orchard (both nominated for the Governor General's Literary Award). He is also the author of three novels, Downriver Drift (Harbour), The Paperboy's Winter (Penguin) and The Bone Sharps (Gaspereau Press). His first book of non-fiction, The Lost Coast: Salmon, Memory and the Death of Wild Culture (Nightwood Editions), was shortlisted for three literary awards: The Writers' Trust Nereus Non-Fiction Award, the BC Book Prizes' Roderick Haig-Brown Regional Prize and the Alberta Literary Awards' Wilfred Eggleston Award for Non-Fiction. The Lost Coast was also chosen as a 2008 Kiriyama Prize "Notable Book." Bowling is the recipient of the Petra Kenney International Poetry Prize, the National Poetry Award and the Orillia International Poetry Prize. Bowling was the recipient of a Guggenheim Fellowship in 2008. A native of the West Coast, he now lives in Edmonton Alberta. His latest collection of poetry is Tenderman (Nightwood), due out in fall 2011.

This vivid and passionate novel opens with the American Civil War, where after the battle of Antietam, we're told that men 'moved among the dead and wounded slowly as wasps over rotted fruit'; it's such writing that makes Tim Bowling's novel memorable—that, and its range, for it ends nineteen years later in western Canada, with two of the major characters. Altogether, a story of impressive scope, and bristling with action. —Jack Matthews, author of The Gambler's Nephew

The most interesting sections of The Tinsmith, which take place during a turf war among the upstart salmon canneries in frontier-era British Columbia, give the book a heart that's undeniably Canadian . . . there's something wonderful about the way these ruthless cannery owners give a little added mythological heft to Canada's west coast. —Edmonton Journal

[A] riveting tale . . . Bowling captures the unrelenting sensory assault of war and industry as they combine in a sort of amoral apotheosis . . . A powerful and emotionally wrenching book. —Quill & Quire

Bowling is a remarkable writer. The Tinsmith is well-served by meticulous research which serves to provide believable settings for the action of this novel. From the battlefields and the cast of characters found there—embalmers, soldiers (from both sides), civilians who came to sightsee, the ladies holding handkerchiefs over their mouths, the photographers who set up their darkroom wagons and provided first-hand visual accounts of the carnage—to the fogs of the Fraser River, he takes the reader into the heart of the dark drama unfolding in these pages. —Harbour Spiel

The Tinsmith is filled with beautiful and vivid imagery . . . The American Civil War, of course, has been written about over and over, but Bowling has a special dark and delicate touch with his treatment of the mad carnival of those times, with its blood and guts, society ladies and grasping businessmen, valour and cruelty. He captures moments from one of the worst periods in the history of this continent. —The Winnipeg Review

Black history in BC brought to life in Tim Bowling’s The Tinsmith.

The Tinsmith is a provocative, ambitious, exciting story . . . [it] delves with guileless courage into the quagmire of past racial conflict, and will be read and recalled with that admirable quality in mind. —Literary Review of Canada

Maclean's Magazine book reviewer Brian Bethune sat down with Tim Bowling to talk about The Tinsmith and Tim's award nomination.

A story as much about society's heavy hand on our backs as the universal human struggle for acceptance in the face of cultural prejudice . . . Bowling creates a bucolic backdrop stained with the reality of war. Lyrical prose enhances a setting the reader falls into. —Alberta Views

Bowling's strong connections to a poetic past resonate most vividly in The Tinsmith, a book that manages to be deeply interesting, searingly beautiful and historically compelling. The Tinsmith touched me completely. It seemed to me the best type of adventure story for the modern man. The Tinsmith included in January Magazine's Best Books of 2012: Fiction.

The Tinsmith begins and ends in blood. Between, the harrowing, stunning new novel by Edmonton writer Tim Bowling is a powerful, haunting evocation of friendship and cruelty, of grace and inhumanity, of violence and beauty. —The Globe and Mail

In a special feature to the National Post, Tim Bowling and Linda Spalding exchanged words about the writing life and their award-nominated novels.

Often what haunts you for a long time has the potential to become literature, Bowling says. And I think I’ve been haunted by that character since I was a kid. —Tim Bowling talking about The Tinsmith in an interview with The National Post's Afterword.

An odyssey that spans a continent—from the civil war battlefields, to the British Columbia salmon canneries, The Tinsmith is an ambitious and spellbinding read. —Helen Humphreys

A haunting tale of quiet courage and friendship in the face of racism, corruption and cruelty that runs from the Battle of Antietam to a remote fishing village in British Columbia . . . Dynamic, dazzling. —Kirkus Reviews

Elegantly written, with characterizations and setting descriptions that paint vivid pictures in the mind . . . this mix of historical novel and mystery should be recommended to all readers of Civil War fiction. —American Library Association's Booklist Online

Lyrical in both its beauty and its horror, The Tinsmith reveals a writer at the height of his powers. From the battlefields of the American Civil War to the salmon canning wars in British Columbia, Bowling creates vivid worlds that move us. In John Dare—the heir to both of these conflicts—we meet a character of great moral complexity, a man trying to come to grips with the mystery at the heart of his identity. Bowling's vision is grand, fierce, and bloody. —Jury Citation, 2012 Rogers Writers' Trust Fiction Prize

Like any general, Bowling is bold at times, but his attacks are on the mark and his theme strikes the heart of the reader. —Salon Books, Telegraph-Journal

Set in the aftermath of an horrendous battle of the American Civil War and two decades later in the Fraser River estuary, this novel works back and forth in time to unveil the relationship of two very different men. A surgeon for the North encounters a strange soldier who aids him in the harsh medical emergencies after the battle. Using the nature of slavery and its brutalities, the realities of war and medicine in this period, and the cutthroat nature of the salmon cannery business, belief, humanity and doing what’s right are explored. This is a well researched and compelling introduction to the time period of the American Civil War and early BC history.

Caution: Extremely explicit depictions of field surgery in wartime and violence and sexual abuse of slaves are included.

Other titles by Tim Bowling

The Call of the Red-winged Blackbird

Essays on the Common and Extraordinary

The Duende of Tetherball

Circa Nineteen Hundred and Grief

In the Suicide’s Library

The Annotated Bee and Me