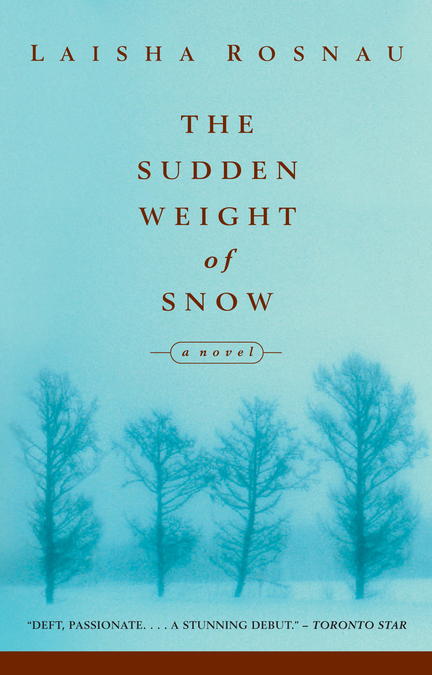 This virtuoso first novel weaves stories and decades into a tightly knit, haunting narrative, as it sets into relief two generations marked by the 1960s – those who lived through them, and those who came after. Seventeen-year-old Sylvia (Harper) Kostak is caught between her mother’s regrets and the strictures of small-town life in the interior of British Columbia. When Harper meets Gabe, an intense and enigmatic young man living on the ’60s-style arts commune outside of town, she is transfixed. Gradually we learn Gabe’s story and what led him to join his estranged mother on the commune, where, in a bid for freedom, Harper eventually finds herself, setting in motion a series of events leading to tragedy. Resonant with longing and a sense of isolation, the novel brings alive the agonies and ecstasies of growing up, sexual discovery, and how the need to belong can shape both decisions and destinies.

Laisha Rosnau is the author of The Sudden Weight of Snow (McClelland and Stewart, 2002), which was an honourable mention for the Amazon/Books in Canada First Novel Award. Rosnau’s first collection of poetry, Notes on Leaving (Nightwood, 2004), won the 2005 Acorn-Plantos People’s Poetry Award. Her second, Lousy Explorers (Nightwood, 2009), was a finalist for the Pat Lowther Award for best book of poetry by a Canadian woman. Her most recent book of poetry, Pluck (Nightwood, 2014), was nominated for the national Raymond Souster Award. Rosnau teaches fiction and poetry at UBC, Simon Fraser University, Vancouver Film School and Okanagan College. She and her family are the resident caretakers of Bishop Wild Bird Sanctuary in Coldstream, BC.

Excerpt: The Sudden Weight of Snow (by (author) Laisha Rosnau)

The story goes something like this: girl meets boy. Something sears inside her. Something empties. The ground freezes. A building catches fire. Things come tumbling down. This story begins before you arrive, and it will end after you are gone. Perhaps it begins even before I start to tell it, when we leave my father – a move that can only be followed by more leave-taking, more absence. Things fall away, leave. I try to use words to bring them back.

I am seventeen, and until this year I have lived in the centre of a triangle formed by the almighty church, my mother’s regret, and the vague idea of what my father may have been like. There she is, my mother, always in the middle of things. She constantly interrupts this story, imposes her own. There are no fathers in this story, although I will write them in. I may try to fill my own father’s absence with other men as I have been assured I will always be compelled to do.

I still catch myself praying, although I try not to. This is what I once prayed for: a way out, hips, breasts, hair so short I could feel air moving on my scalp, love, sex that would split me open gently and then let me go, a large hand cupping the back of my head. I got almost all of those things.

My name is Sylvia Harper Kostak. I prefer to go by Harper. That was my father’s last name, probably still is. Once I was Sylvia Rose Harper. Then we left and my mother took back her name, clipped it to the end of mine. Something had to go and both of us agreed it should be the Rose. I have never liked the name Sylvia either – no one should have a name with two letters so close to the end of the alphabet in it like that. So, I go by Harper.

What else do you need to know? I am probably an unreliable witness. This all starts shortly before the first snowfall.

I marked my own leave-taking with footsteps, counted them from locker to door. Thirty­six. If anyone wanted to stop me, they could call, “Sylvia Kostak, where do you think you’re going? Aren’t you supposed to be in class?” But they never did, not at Sawmill Creek Secondary School.

Sawmill Creek is a small town in British Columbia in the foothills of the Rocky Mountains, a clearing where several small valleys meet. It is five elementary schools, one high school, one mall, a 7-Eleven, a mill that goes through cycles of lay-offs like seasons and is always threatening closure, and too many churches. A place that hollowed out the pit of my stomach like hunger. People in Sawmill, as we called our town, had distinct values, a moral code that informed the whole community. Some of the things that people objected to were child abuse, homosexuality, vandalism, laziness, single moms, welfare moms, public nudity, lying, cheating, stealing, the decline of family values, zealous feminists, and most prominently, anyone who protested a man’s God-given right to make a living and support his family. The last mentioned were mainly the environmentalists from the city who knew nothing about the land or how to live off it honestly.

Even in a community as strong as Sawmill Creek, not everyone followed the code. There were old draft dodgers living in the hills with ham radios and Marxist manifestos, though the war they were running from had ended thirteen years before. There were those who stitched marijuana crops into the fabric of the forest and clerks at the health food store who claimed we could cure every ailment with the right herbs and tinctures. Somehow, we even had teachers infiltrate our secondary school who taught us about passive aggression, relaxation techniques, and conservationist forestry practices. These teachers were from other, bigger places – Vancouver, Calgary – and came to Sawmill Creek as student teachers, were lured to stay by the fruit-filled valley, the ski hill half an hour from town. We knew better than to tell our parents about what they taught us. We hung on to these glimpses of a larger world. Dreamed of ways to get there. People told us we’d want to return – This is such a good place to raise a family – but we’d been raised here and knew it wasn’t true.

I was not beautiful, not yet. My hair, dark and long, was not the blue-black of Archie’s Veronica but the dull brown of dug earth. Hazel eyes and olive skin, I liked to believe, were the dark Ukrainian in me. Physical reminders of the part of my mother’s family that had travelled across the Black Sea from Persia to Ukraine in boats carved out of single cedar trees, large enough to accommodate entire families. This imagined history was as exotic as I could pretend to be.

From the fifth grade until this story begins, I was a toothpick, a tomboy. Not everyone knows this, but when they first begin to rise up, breasts surface beneath the nipples, as hard as rocks trapped under that darker skin. Painful, too. One usually appears first. Just when you have reached the cusp of your fear, another appears. Before I understood what the “life skills” component of phys. ed. was in the fifth grade, I was seeing the uterus lit up on a chart. An upside-down pear, two dangling gloves. The elements the teacher told us about were eggs popping from sacs and travelling tubes, cells sloughing, blood flowing. Cramps. The important thing she ­didn’t tell us was that the firm bulbs of emergent breasts can easily be mistaken for cancer by the untrained eye and hand, under bedclothes in the dark, confused. My mother, Vera, to her credit, didn’t flinch or laugh when I told her about the cancer. She simply explained to me what was happening, then bought me a training bra as though to test the very name of the thing – a bra to train and coax the breasts along. Mine never did make it to the finish line.

My hips were two bones pushing against skin and my best friend, Krista, believed I could poke an eye out with them. I didn’t think that narrow space between bones could take sex into it. Sex was something thick and unknown, like beauty. My body ­wasn’t ready for either. Sometimes, I thought I could feel the promise of something – a pain, wound like a spring in my limbs, throbbing in my legs at night – and I would wake and pound my fists into my calves and thighs, trying to knock the ache out.

“Rosnau’s sensitive portrayal of the liminal world of adolescence captivates.…Deft, passionate.…Rosnau is one writer whose book lives up to the jacket hype.…Fresh, original, funny and rife with insight.…A stunning debut. . . .”
–Toronto Star
“Delicate and powerful, all-encompassing.…The Sudden Weight of Snow is compassionately conceived and beautifully written. The characters and language insinuate themselves into the mind and become an unshakeable and welcome part of a reader’s landscape.”
–Edmonton Journal
“True in a way only excellent fiction can be.…Rosnau’s nearly perfect emotional pitch, precise descriptions and gift for nuance makes Harper’s own confusion compelling. Quite an achievement in a first novel.”
–Ottawa Citizen

“Her depictions of small-town adolescence will resonate with any reader who spent their teenage years longing to be anywhere but home.”
–Quill & Quire
“The Sudden Weight of Snow declares the arrival of an exciting new voice on the CanLit scene.”
–Kitchener-Waterloo Record
“In this moving first novel, Laisha Rosnau demonstrates a clear, keen eye for the nuances of mannerism and the significance of gesture, and gives a vivid account of growing up in a blind alley of a town in the B.C. interior. She also reaches well beyond her setting by means of a structure of slowly converging, and finally colliding, stories.”
–Steven Heighton

“Rosnau’s tale is about time and place, and the search for roots, a personal grounding place. Her prose has power and weight.”
–Hamilton Spectator
“The emotional power of Laisha Rosnau’s debut novel descends unexpectedly, leaving the reader tenderly transfixed.”
–Susan Swan

“Rosnau makes good use of the inherent tensions and conflicts occurring in such a cultural crossroads.…Rosnau can write a sentence as clear as the sky over Kamloops.”
–Georgia Straight
“Engrossing.…You come away from the book with a renewed appreciation of just how mysterious other people can be – not just strangers, but the very people who are closest and
most important to you.”
–Vue Weekly
“A provocative study of alienation and belonging.”
–Vancouver Sun
“The writing is finely crafted throughout, earthy yet lyrical. Rosnau is a talent to watch.”
–Montreal Gazette

Other titles by Laisha Rosnau

Into the Western Canon (by Gillian Wigmore)