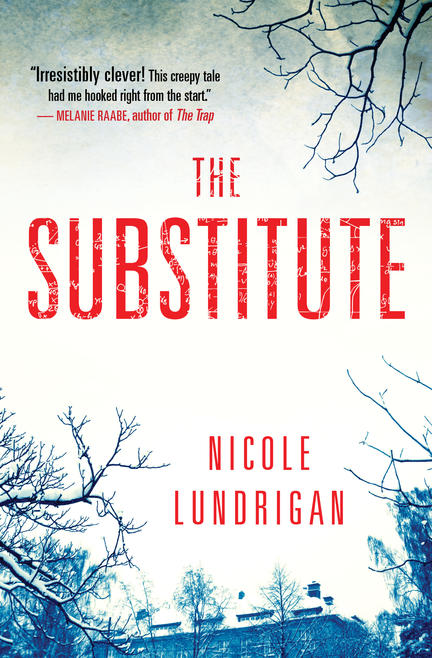 In the tradition of Gillian Flynn and Paula Hawkins, The Substitute is a deliciously creepy psychological thriller that will keep you guessing until the very last page.

Warren Botts is a disillusioned Ph.D. taking a break from his lab to teach middle-school science. Gentle, soft-spoken, and introverted, Warren befriends thirteen-year-old Amanda, a lonely student looking for guidance.

One morning, Warren returns from a jog to find Amanda dead, hanging from a tree in his backyard. A police investigation follows, but Warren is unable — or unwilling — to answer the questions that swirl around him. Suspicions mount, and Warren’s peaceful neighbours quickly become hostile.

Meanwhile, an anonymous narrator who possesses a dangerous combination of extreme intelligence and emotional detachment offers insight into events past and present. As the tension builds, we gain an intimate understanding of the power of memories, secrets, and lies.

Nicole grew up in Upper Gul­lies, New­found­land, with her five sib­lings and par­ents, John and Nancy Lun­dri­gan. She attended Queen Eliz­a­beth Regional High School in nearby Fox­trap. Dur­ing her final year at QERHS, she enjoyed a semes­ter of school in Amiens, France where she lived with a Baron and Baroness in the Chateau de Prouzel.

After high school, Nicole moved to Fred­er­ic­ton, and earned a BSc from the Uni­ver­sity of New Brunswick. The sum­mer after grad­u­a­tion, she resided in the small com­mu­nity of Morawhanna, Guyana, where she helped to rebuild a school­house, vol­un­teered with a doc­tor bring­ing health­care to remote vil­lages, and assisted in a sea tur­tle con­ser­va­tion pro­gram on Shell Beach. Upon return­ing to Canada, Nicole attended Saint Mary’s Uni­ver­sity (Hal­i­fax) and received a BA (hon­ours) in anthro­pol­ogy. Dur­ing her time in Hal­i­fax, she worked on an archae­o­log­i­cal dig which involved the removal and analy­sis of skele­tal remains beneath the Lit­tle Dutch Church. In 1996, she moved to Ontario, and com­pleted an MSc from the Uni­ver­sity of Toronto with a focus on phys­i­cal anthro­pol­ogy. Her main area of inter­est was under­stand­ing the con­di­tions affect­ing the degra­da­tion of DNA in post­mortem skele­tal remains.

Shortly after grad­u­a­tion, she began free­lance writ­ing and her work has appeared in a vari­ety of pub­li­ca­tions, includ­ing Reader’s Digest, Moth­er­ing: The Nat­ural Fam­ily Liv­ing Mag­a­zine, Law and Order: Police Man­age­ment, and the Hal­i­fax Daily Her­ald. She is the author of four nov­els: Unrav­el­ing Arva, Thaw, The Seary Line, and Glass Boys. Her lit­er­ary fic­tion has been selected as a top ten pick by Canada’s national news­pa­per the Globe and Mail, was long-listed for the Relit Award, and given hon­ourable men­tion for the Sun­burst Award.

She resides in Ontario with her hus­band and three children.

Other titles by Nicole Lundrigan

Canadian Loan Stars for May and June 2017

Some Books We're Looking Forward to in 2017

It seems that Canadian literature is rife with stories of isolated characters and their slow creeping madnesses. And yes, some of them do end up engaging …