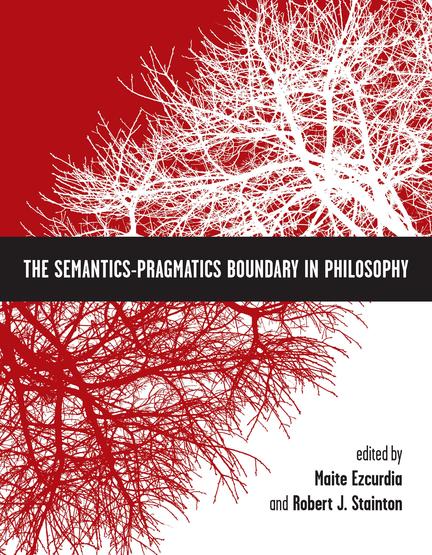 The boundary between semantics and pragmatics has been important since the early twentieth century, but in the last twenty-five years it has become the central issue in the philosophy of language. This anthology collects classic philosophical papers on the topic, along with recent key contributions. It stresses not only the nature of the boundary, but also its importance for philosophy generally.

Maite Ezcurdia is Research Fellow at the Instituto de Investigaciones Filosóficas at the National University of Mexico (UNAM).

Robert J. Stainton is Professor of Philosophy and Associate Dean (Research), Faculty of Arts and Humanities, University of Western Ontario.

"A wide-ranging collection of must-read articles on philosophical topics pertaining to, revolving around, or just straddling the line between semantics and pragmatics."

"A highly useful collection containing many influential papers, including a number of classic pieces. It is a natural choice for survey courses in semantics and pragmatics."

"Ezcurdia and Stainton provide an elegant overview of the different ways to understand the distinction between semantics and pragmatics, and the main attempts to locate the boundary between them. They have selected the definitive papers that bring into focus the significance of finding this boundary, and its implications for the study of metaphor, for the relation between thought and language, and for contemporary discussions of contextualism and relativism. This anthology is an ideal text for any course in philosophy, linguistics, or cognitive science that is aimed at introducing undergraduate or graduate students to the potential scope and limits of systematic semantic theorizing."

Other titles by Maite Ezcurdia

New Essays in the Philosophy of Language and Mind

Other titles by Robert J. Stainton

The Theory and Applications of Molecular Sememics

New Essays on the History of Philosophy of Language

New Essays in the Philosophy of Language and Mind

Perspectives in the Philosophy of Language