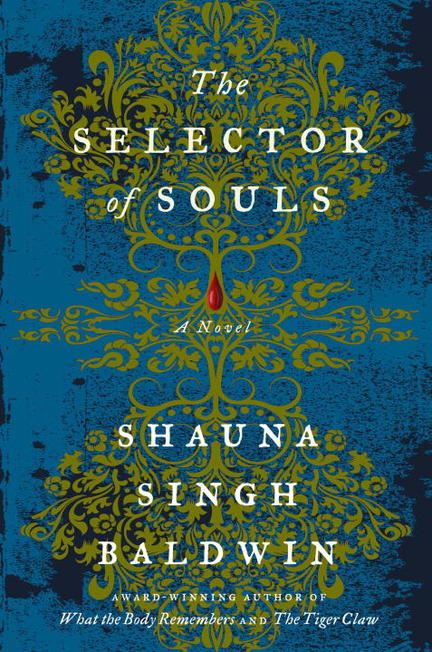 The Selector of Souls begins with a scene that is terrifying, harrowing and yet strangely tender: we're in the mid ranges of the Himalayas as a young woman gives birth to her third child with the help of her mother, Damini. The birth brings no joy, just a horrible accounting, and the act that follows--the huge sacrifice made by Damini out of love of her daughter--haunts the novel.
In Shauna Singh Baldwin's enthralling novel, two fascinating, strong-willed women must deal with the relentless logic forced upon them by survival: Damini, a Hindu midwife, and Anu, who flees an abusive marriage for the sanctuary of the Catholic church. When Sister Anu comes to Damini's home village to open a clinic, their paths cross, and each are certain they are doing what's best for women. What do health, justice, education and equality mean for women when India is marching toward prosperity, growth and becoming a nuclear power? If the baby girls and women around them are to survive, Damini and Anu must find creative ways to break with tradition and help this community change from within.

Shauna Singh Baldwin's first novel, What the Body Remembers, was published in 1999 by Knopf Canada, Transworld UK, Doubleday USA, and (as an audiobook) by Goose Lane Editions. It received the 2000 Commonwealth Writer's Prize for Best Book (Canada-Caribbean region) and has been translated into fourteen languages. Her second novel The Tiger Claw was a finalist for Canada's Giller Prize 2004. Shauna is the author of English Lessons and Other Stories and coauthor of A Foreign Visitor's Survival Guide to America. Her awards include the 1995 Writer's Union of Canada Award for short prose and the 1997 Canadian Literary Award. English Lessons received the 1996 Friends of American Writers Award. A former radio producer and ecommerce consultant, her fiction and poems are widely published in literary magazines and anthologies in the U.S.A., Canada, and India. She has served on several juries and teaches short courses in creative writing. Shauna holds an MBA from Marquette University and an MFA from the University of British Columbia. We Are Not in Pakistan: Stories was published by Goose Lane Editions in 2007. Shauna's third novel, The Selector of Souls, will be published by Knopf Canada in September 2012. Reviews, reading schedule, and interviews at: www.ShaunaSinghBaldwin.com.

“The Selector of Souls is a bold and vivid dramatization of the charged choices shaping women’s lives in 1990s India. Shauna Singh Baldwin has a gift for warm-hearted and incisive storytelling. This is a novel expansive in its vision and defiantly human in its embrace of the contradictions that animate us all.”
—Catherine Bush, author of The Rules of Engagement and Claire’s Head

“From its opening lines, in which a mundane scene of domestic life is slowly transformed into horror, The Selector of Souls catapults the reader into a finely imagined space. Shauna Singh Baldwin writes compellingly of the conventions that curtail and threaten the lives of Indian women. Her polished language and original imagery consistently stir and surprise.”
—Erna Paris, author of Long Shadows: Truth, Lies, and History

“A canvas of rich images, a cast of memorable characters with all of their strengths and flaws, important moral questions, gripping stories intertwined. Shauna Singh Baldwin has the skill to mix these ingredients, add her humanist touch and come up with a superb novel.”
—Frances Itani, author of Deafening and Requiem

“The Selector of Souls is a mesmerizing novel, bravely revealing the harsh realities of an entrenched patriarchy bound by the forces of history. Baldwin’s lush details are vivid and luminous, drawing us into the multitude of cultures and religions, the richly textured worlds of India at the end of the last century. Sweeping and evocative, but most of all: illuminating.”
—Sandra Gulland, author of the Josephine B. trilogy and Mistress of the Sun

“In this tender twister of a tale, Shauna Singh Baldwin takes us inside a world where women murder or abort their daughters to help us understand how gender-loathing and its attendant horrors can be transformed by sympathy and love.”
—Susan Swan, author of The Wives of Bath and The Western Light

Other titles by Shauna Singh Baldwin

We Are Not in Pakistan

What the Body Remembers