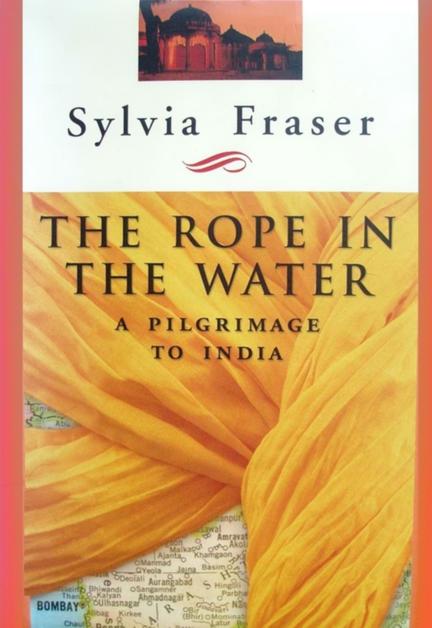 "At Kovalam beach on India's southwestern shore I plunge into the Arabian Sea, the same soft temperature as the air...Looking shoreward, I see lifeguards gesturing. Since I'm much further than I imagined, I begin a determined swim toward them...The lifeguards continue to blast and gesture, but I'm powerless against the riptide irresistibly sweeping me out to sea. Though my situation appears hopeless, I'm about to undergo the most remarkable and mysterious event of my life...." So begins The Rope in the Water, the story of Sylvia Fraser's three-month pilgrimage to India in search of "something larger than myself, something deeper, something more."

Travelling 12,000 kilometers across deserts and through jungles, Fraser visits sacred sites such as the twilight city of Varanasi on the Ganges, dense with the smoke of hundreds of funeral pyres; north to the glittering Golden Temple of the Sikhs; up Mount Abu where she stays with a Hindu sect called the Brahma Kumaris; south to a Buddhist retreat where she meditates eleven hours a day for ten days while observing a vow of silence; and to the Kovalam beach where her life is saved by a miracle.

Fraser brings alive the sense-luscious tapestry of India, from its fluorescent seas of turbans and flowing robes, to the cerulean alleyways and the hot crush of urban bazaars, while exploring Eastern concepts such as "You create your own future" and "Change yourself and you change everything." Humourous and intelligent, The Rope in the Water is an uplifting yet earthbound literary odyssey for all those interested in the physical and philosophical worlds beyond their own.

SYLVIA FRASER was born in Hamilton, Ontario and graduated from the University of Western Ontario with an Honors B.A. in English & Philosophy. She worked for many years as a feature writer for the Toronto Star Weekly, travelling extensively throughout North America, including the Arctic, as well as Mexico, Panama, Europe, and Africa. Literary Critic Elizabeth Westbrook described Sylvia's writing as "the best kind of fiction: accessible and entertaining stories embedded in rich complexity." She is responsible for six novels: Pandora (1972), The Candy Factory (1975), A Casual Affair (1978), The Emperor's Virgin(1980), Berlin Solstice (1984), and The Ancestral Suitcase (1996). Her non-fiction works include: The Quest for the Fourth Monkey: A Thinker's Guide to the Psychic and Spiritual Revolution (published in 1992 as The Book of Strange) awarded the American Library Association Book List Medal in 1994; My Father's House: A Memoir of Incest and of Healing (1987), extensively translated and adapted for the stage, received the Canadian Authors Association Non-Fiction Book Award in 1987. Fraser is also the recipient of the Women's Press Club Award for Canadian Journalism, 1967 and 1968; the President's Medal for Canadian journalism, 1968; and the National Magazine Gold Medal for Essays, 1994.
For many years, Fraser taught Creative Writing at Banff Centre. She has conducted numerous lectures and workshops sponsored by a variety of universities. She served on the Arts Advisory Panel to The Canada Council and was a member of The Canada Council's 1985 Cultural Delegation to China. Currently, Sylvia is vice-chair of The Writers' Development Trust, a charitable organization for the support and promotion of Canadian authors.

...a brave meditation on the work of spiritual transformation.

Fraser strikes the perfect balance between eager spiritual adventurer and keen-minded journalist...The result is a book that doesn't so much tell us about India as it does take us there.

Part travelogue, part memoir, part journal of self-discovery...full of delightful vignettes and character studies, all seamlessly woven together and fascinating.

...it is Fraser herself who provides the prose that makes this book unforgettable.

... a book that succeeds on many levels — as a memoir, a travel guide, an adventure story, a philosophical treatise and a highly readable introduction to eastern religions and mysticism. Both engrossing and entertaining... one of the most courageous, skilled and unconventional writers working in Canada.

Other titles by Sylvia Fraser

Exploring the Mysteries of the Amazon