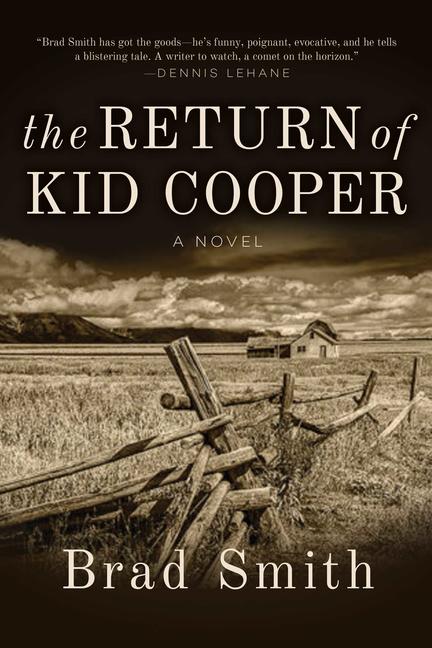 The year is 1910. Nate Cooper is an old-school cowboy who has spent nearly thirty years in a Montana prison of a wrongful life sentence for a false murder conviction. Nate's moral compass is true and unwavering: he does all the wrong things for all the right reasons. Upon his release he learns that the turn of the century has brought great change--none of it good. Horses are being replaced by the motorcar, his girlfriend has long ago married his best friend, his nemesis is running for Governor, and the Blackfoot Indians (the people he went to prison trying to defend) are still being betrayed by ranchers. So some things haven't changed. Nate is one of them. He returns to his Northern Montana ranching town a free man and stirs up the pot of controversy immediately--seeking justice, evading hired guns, brawling in saloons, righting past wrongs, and ferreting out--with the help of a young newspaper reporter and the woman he used to love--a fraudulent boundary adjustment robbing the Blackfoot (again) of their territory. Along the way, he ruffles feathers all the way to the State House, and before the storm he brings is over, he and the friends of his youth will all pay a shockingly high price for justice.

Brad Smith, writer born and raised in the hamlet of Canfield, in southern Ontario, a couple of hours from Toronto. After high school, he worked for the signal department of the Canadian National Railway for three years, and then got a chance to work on a rail project in South Africa. Upon returning from Africa, Smith worked all over the place - Alberta, British Columbia, Texas - at a variety of jobs. Farmer, signalman, insulator, truck driver, bartender, schoolteacher, maintenance mechanic, roofer, and so on. He became a carpenter and built custom homes in Canada. He still works as a carpenter when not writing. He now lives in an eighty-year-old farmhouse near the north shore of Lake Erie. His books have been published by Penguin Canada, Doubleday Canada, Simon & Schuster Canada and his forthcoming novel will be published by At Bay Press.

Praise for The Return of Kid Cooper:

"Part Western adventure yarn, part cowboy ranch romance, The Return of Kid Cooper opens in 1910, with outlaw Nate Cooper stepping out of Montana prison, after spending twenty-eight years behind bars. Dazzled by the changes the modern age has ushered in —including telephones, automobiles and electric lighting — the roguish fifty-something makes his way to his best friend's property, where he’s immediately caught up in an old animosity and an old love, both of which have shaped his life in irreversible ways. Added to that, Blackfoot friends need his help to reclaim their ancestral lands. A compelling, action-packed romp through politics, romance, morality and history by author Brad Smith, ... a history buff that who reportedly count the actor Burt Reynolds among his fans."— Toronto Daily Star

"The Return of Kid Cooper is Brad Smith at his best—clear-eyed, tough-minded and true of heart. When aging Nate Cooper is released from prison, he's got a plate full of obligations to tick off: vengeance for a raped friend, finding gainful employment, and re-uniting with his old partner and one true flame. Nate is a cowboy trying to ply his dwindling trade in 1910, and the world makes nothing easy on him. Smith— once a farmer, signalman, truck driver, bartender, teacher and carpenter— understands that work will take its toll, even when it's the only thing holding a soul together. This is a powerful novel, fully felt and beautifully written." — T. Jefferson Parker, New York Times Bestselling author

"The Return of Kid Cooper is a western set in the forgotten time between horses and the sterilizing of the American West. Kid Cooper is a classic tragic hero and Brad Smith's rendering of him is full-hearted and poignant."— Dan O'Brien, author of Buffalo for the Broken Heart and many others.

"The Return of Kid Cooper can claim a secure place in the canon of literature of the American West. Brad Smith's tale of old-fashioned courage and western justice is reminiscent, in its high drama, wit, and splendid idiosyncrasy, of Lonesome Dove. I was reminded also of Annie Proulx's laconic Wyoming stories, and that most iconic of Western loners, Shane." — John Hough, Jr., author of Little Bighorn

"A tour de force. Brad Smith explores powerful universal themes while bringing to life unforgettable characters that make this book a must read. If Cormac McCarthy, Larry McMurtry, and Elmore Leonard collaborated on a book, it might sound very much like The Return of Kid Cooper." —D.B. Jackson, Winner of the Western Heritage Award, and author of Slow Moving Parts.

"From the soft click of a cue ball in a quiet saloon, to lovers on the run reuniting after thirty years, or the blast of a .44 at the final shootout, Brad Smith can really tell a story. He paints this elegiac tale of early 20th century Montana on a big canvas with the easy authority of Larry McMurtry’s Lonesome Dove and the unflinching violence of Dashiell Hammett’s Red Harvest, pulling the Western into this new era with heartbreaking intensity, where tenderness and threat exist in every character, and on every page."— Bart Paul, author of Under Tower Peak and Cheatgrass

"Brad Smith has got the goods--he’s funny, poignant, evocative, and he tells a blistering tale. A writer to watch, a comet on the horizon." --Dennis Lehane

"Brad Smith is a writer with lots of skill, lots of heart, [and] lots of brains." --Richard Russo

"Smith has marvelous control of his material, effortlessly mixing laugh-out-loud comedy with streaks of country noir that call to mind Daniel Woodrell." --Booklist

"With dialogue that crackles like musket fire, Brad Smith's novel is true to Gettysburg's heroic past and madcap present, and a deliciously entertaining tale of uncivil war of the legacy of America's greatest conflict." --Tony Horwitz, author of Confederates in the Attic

"Smith has written tight, fast-paced novels his entire career…and reading one is like riding a thoroughbred."--The Chronicle Herald

"Brad Smith combines smooth writing with a twisted mind to give readers Carl Hiassen humor, but with horses instead of gators." --Julie Kramer, author of Shunning Sarah

Other titles by Brad Smith

How Microsoft Inspires Employees and Alumni to Change the World

Leading in a Culture of Change

Big Man Coming Down the Road

A recommended reading list by Brad Smith, who (according to Dennis Lehane) is "a writer to watch, a comet on the horizon."