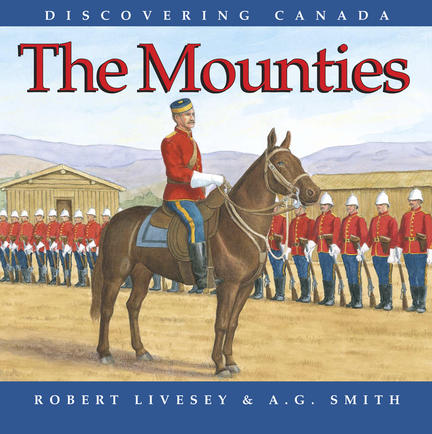 The scarlet tunic of the Royal Canadian Mounted Police is recognized throughout the world. It's been worn since 1873 when Prime Minister John A. Macdonald created the original force-the North-West Mounted Police-to round up horse thieves and whiskey smugglers on the Prairies.

The Mounties presents the amazing stories of such larger-than-life figures as James Macleod, an officer who befriended the powerful Blackfoot chief, Crowfoot; James Morrow Walsh, who won the trust of Sitting Bull when he arrived in Canada after the massacre at Little Big Horn; Jerry Potts, the famous MÚtis scout and interpreter; and Sam Steele, the superintendent who kept the peace during the Klondike Gold Rush.

Today, the Mounties are a much larger force and operate with sophisticated equipment and modern technology. But at the heart of the RCMP are the brave men and women who risk their lives maintaining law and order across the country.

A.G. Smith taught printmaking and drawing at Morehead State University in Kentucky and at the University of Windsor. Since 1981, he has worked as an illustrator and paper engineer on more than 100 book projects, including social studies and history books for children and cut-andassemble and colouring books. He is the author/illustrator of What Time Is It? and Where Am I? His art has been exhibited at galleries in Canada and the U.S. A.G. Smith lives in Windsor and Nobel, Ontario.

Robert Livesey taught in Ontario secondary schools for 12 years and was a professor of communications in the School of Arts and Animation at Sheridan College for 24 years. He is president of CEO of Little Brick Schoolhouse Inc., which produces textbooks and Canadian history video kits.

"There is nothing in The Mounties that has not been told many times before; however, the stirring tales of Fort Whoop-Up, James McLeod, Jerry Potts, Sitting Bull, the Klondike Gold-Rush, Soapy, Smith and the "Mad Trapper of Rat River," the St. Roch and the North-West Passage and the murder of four officers in Mayerthorpe, Alberta, might inspire students new to the story of western development to delve deeper into Canadian history."
Recommended
— CM Magazine

"This series provides a wealth of information bout the people, and events in the history of Canada."
— London Free Press