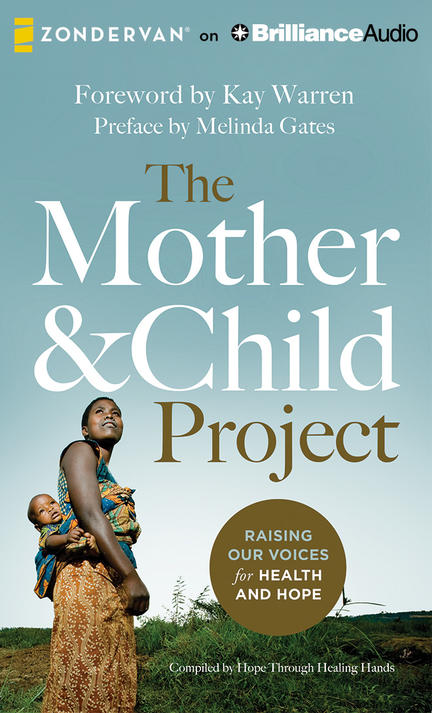 In The Mother and Child Project, Melinda Gates, Kay Warren, Tony Campolo, Christine Caine, and Senator William H. Frist, along with other inspirational leaders, cultural icons, political experts, academics, and service providers, provide a personal yet fact-based narrative exploring the plight of women and children living in extreme poverty in an effort to educate and inspire the church to speak up in support of maternal and child health issues in the developing world.

Dozens of influential leaders have heard the pleas of mothers and children in developing countries. Raising their voices to inspire a movement to increase healthy pregnancies and lower death rates, Melinda Gates, Kay Warren, Bill Frist, Kimberly Williams Paisley, Michael W. Smith and more speak out about why people of faith must get involved in The Mother and Child Project: Raising Our Voices for Health and Hope. Almost 287,000 women die each year because of pregnancy and birth complications. Many orphans are left behind in the wake of this tragedy, and without a mother, many of those children die as well. If only enough people knew. We have the resources to prevent this crisis, but we must take action.

Fortunately, Hope Through Healing Hands, a nonprofit organization promoting awareness for healthy mothers and children worldwide, is already spreading the word. Not only can we save lives, reduce abortions, and decrease death rates, but also we can help build healthier, thriving families and bring stability and sustainability to families, communities and nations.

The question is, will you join them?

Christine Caine is a recognized teacher, activist, and author of the bestselling books Undaunted and Unashamed. As a founder of The A21 Campaign, Christine leads one of the largest non-profit organizations in the world dedicated to rescuing victims of human trafficking in twelve countries. Christine and her husband, Nick, spend their time in both Sydney, Australia, and the United States, and they adore their daughters Catie and Sophie.

Four-time Grammy nominated Natalie Grant is known for her powerful and soaring vocals, heart-gripping lyrics and passionate performances, and has remained one of the top-selling Christian & Gospel artists since her 2005 breakout RIAA Gold certified album, “Awaken.” She has since gone on to have over 3 million in career sales. The Gospel Music Association has named her Female Vocalist of the Year 5 times and she has had multiple number 1’s on the Billboard chart. Her most recent project, “Be One,” released on November 13th, 2015.
More than just music and awards, Grant has built a relationship with her fan base on a personal level that goes well beyond the music. Regarded as real, authentic and transparent, that connection with people puts Grant at the top of the industry with fan engagement across all social media platforms.
Beyond her music career, Natalie has been an outspoken advocate for victims of human trafficking since 2005. She co-founded Hope for Justice International, which identifies and rescues victims of trafficking and then provides them with complete restorative care. The organization now has 6 offices spanning 4 countries and 3 continents. Though she is a Seattle native, Natalie makes her home in Nashville, TN with her husband, producer/songwriter Bernie Herms and their three children: twins Grace and Bella, and their youngest, Sadie

Other titles by Kristin James

The Wedding of the Century & Other Stories

Other titles by Gabe Wicks